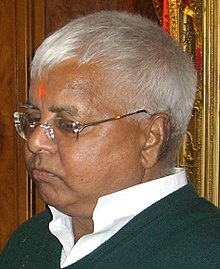 He was facing allegation that fake allotment letters had been used to withdraw Rs33.67 crore instead of the state sanctioned amount of Rs7.10 lakh.

Tejashwi Yadav, son of Lalu alleged a conspiracy by the Nitish Kumar government to frame the RJD chief and asserted that the party will challenge the verdicts in all three fodder scam cases in a higher court of law.

"People know how BJP, RSS and more importantly Nitish Kumar have conspired against Lalu-ji. We will approach higher courts against all these verdicts," Tejashwi told ANI after today's judgment.

There were 56 accused in all, including former chief secretary of Jhakhand Sajal Chakroborty, who was deputy commissioner of west Singhbhum district when the alleged fraudulent withdrawal had taken place.

Yadav as first convicted in a fodder scam case in 2013 and was awarded a five-year jail term. Earlier this month Yadav was sent to jail over fraudulent withdrawal of Rs89 lakh from the Deoghar district treasury between 1990 and 1994. He has applied for bail for which the hearing is on.

The 69-year-old, who is in Birsa Munda jail, has turned down the offer of the judge to shift him to an open jail where prisoners can stay with their families in cottages.

He told the judge maintaining law and order there might be difficult as his supporters would insist on accompanying him there.