The United Progressive Alliance (UPA) government at the centre has decided to propose tough new law to check crimes against women, which could include a provision like chemical castration of perpetrators of rape, as protests against the death of the Delhi gang-rape victim swelled over. 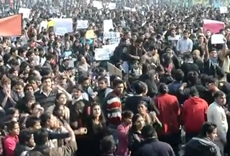 The proposed measures also include imprisonment up to 30 years for rape convicts in rarest of rare cases and setting up of fast track-courts to decide the cases within three months.

These were some of the measures discussed at the meeting of the Congress party chef Sonia Gandhi at a meeting with a group of people protesting against the gang-rape incident early last week.

The final draft of the bill, which is yet to be submitted to the Justice JS Verma Committee set up by the centre in the wake of the brutal gang-rape of a paramedical student in Delhi on 16 December.

While there is no final draft of the law, the ministry for women and child development headed by Krishna Tirath is expected to prepare a summary of the suggestions and submit it to the three-member committee headed by Justice Verma, which will review existing laws and recommend changes in them to effectively check crimes against women.

Since the perpetrators of the crime involved a juvenile aged a few months less than 18 years as well, the draft proposals have sough that only those aged below 15 years should be described as juvenile.