Captain Tania Shergill of the Corps of Signals made history on Wednesday when she led an all-male contingent at Army Day parade, becoming the first woman officer to have achieved the feat. She has been named parade adjutant for the Republic Day parade as well. 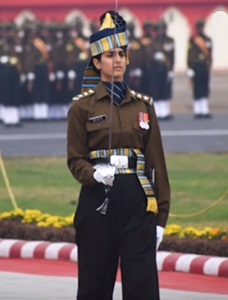 Shergill, a fourth-generation woman army officer, is an electronics and communications graduate and was commissioned from the Officer Training Academy, Chennai in March 2017.
Sher Gill, an engineering graduate in electronics and telecommunications from a college in Nagpur, literally stood tall with her 5 foot 9 inch frame.
Hailing from Hoshiarpur in Punjab, she spent a better part of life in Mumbai where her parents were settled till retirement.
Both her father and grandfather have served in the Army. Her father was in 101 Medium Regiment (Artillery) while her grandfather was in the 14th Armed Regiment (Scinde Horse). Interestingly, her great grandfather was in the Sikh Regiment.
While a woman leading a military parade is not new, Tania has achieved a rare distinction by becoming the Parade Adjutant for the first time in the history of the Army Day parade
A woman officer has become the Parade Adjutant for the first time in the history of the Army Day parade where the Army showcased its military might and some of its state-of-the-art assets.
During the 2019 Republic Day parade, another woman, Captain Bhavna Kasturi led an all-men contingent. There were all woman contingents also at Republic Day parades.
President Ram Nath Kovind took to Twitter to congratulate the Indian Army on this day. "On Army Day, greetings to the valiant men and women of the Indian Army, to the veterans and to their families. You are our nation’s pride, the sentinels of our liberty. Your immense sacrifice has secured our sovereignty, brought glory to our nation and protected our people. Jai Hind!"
"The Army is the pride of India. On the occasion of Army Day, I salute the indomitable courage, gallantry and valour of all the soldiers of the country," Prime Minister Narendra Modi wrote in his Twitter account.
Army Day is celebrated on 15 January every year in recognition of Field Marshal Kodandera M Cariappa taking over as the first Commander-in-Chief of the Indian Army from General Sir Francis Butcher, the last British Commander-in-Chief of India in the year 1949.
MORE REPORTS