Maruti Suzuki India, the country's largest carmaker by volumes, is planning to launch a new version of the hatchback Swift, its best-selling model, in August. It has already stopped production of the old Swift at its Manesar plant in Haryana near Delhi. 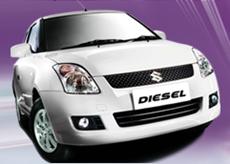 Maruti has suffered a big loss of production and revenue due to a 13-day workers' strike at its Manesar facility last month. Although the strike has now ended, reports suggest that the issue is still simmering.

The original Swift has recorded cumulative sales of over 600,000 units so far. The diesel version has seen a particular surge in demand lately, after petrol prices were partly freed from government control. Six or seven of every 10 Swifts sold are now diesel-powered.

Maruti Suzuki India has lost both market share and margins in June due to the production loss at Manesar, increased competition from new launches by other carmakers, and rising inventory levels.

The company's own estimates peg market the share loss at 3 per cent in the last month, when production fell by about 16,000 units. Its margin loss is estimated at 150 basis points. Dealer inventories have risen to 30 days in the June quarter against 2-3 weeks earlier.

The revamped Swift is not the only new launch as the company tries to recover lost ground. A new Dzire and a new multipurpose vehicle, provisionally called RIII, are also slated for launch before December.

The most interesting feature of the new Swift is a plastic fuel tank. This is slated to offer several advantages such as reduction in vehicle weight by as much as 25 per cent, safety aspects like crash and fire resistance, and corrosion resistance – also resulting in higher resale value for the buyer.