Honda Motorcycle and Scooter India has started shipping its highly anticipated two-wheeler crossover Navi, priced Rs39,500 (ex-showroom, Delhi). The standard Navi can be bought in 5-colour options - Patriot Red, Hopper Green, Shasta White, Sparky Orange, and Black. The Navi has been developed from concept to commercial production by Honda R&D India and is targeted at the aspiring youth, who want to have fun and stand out. 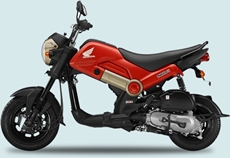 The Navi would be available in phases across the country, starting with Mumbai, from this month. Youngsters would be able to get up close with the Navi at Honda dealerships, where the company would offer a range of customisation options.

To cater to this social media savvy generation, an exclusive android mobile booking application for Navi had been created. The app which was launched at the Auto Expo 2016, the application had already clocked over 20,000 downloads.

The response from customers had been overwhelming as can be seen from the bookings crossing the 1000 mark in just over month's time.

HMSI had started dispatching the vehicle from its Tapukara, Rajasthan based facility. According to commentators, the bookings for the Navi in a little over a month's time, was a great number considering that it was an all-new segment in the country.

''Disrupting the monotony and bringing FUN to 100-110cc segment, the Navi is 100 per cent developed by Honda R&D India from concept development to commercial production. It offers New additional Value for India (NAVI).'', said the company in a statment.

The Honda Navi would offer the convenience of a scooter with a CVT automatic gearbox, coupled with the capabilities of a bike with a motorcycle-like design and build quality.