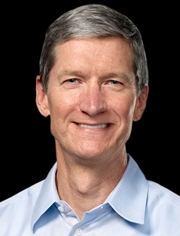 Apple CEO Tim Cook yesterday said in an interview that the company has repurchased $14 billion worth of its stock in the past two weeks – a move that came after the maker of the iPhone posted a decline in quarterly profits.

Speaking to The Wall Street Journal, Cook said that he was surprised by the 8 per cent drop in the company's share price on 28 January, the day after it reported lower revenue although it sold a record number of iPhone.

Cook said including the latest share buyback, Apple had bought back shares worth more than $40 billion over the past 12 months, which was a record for any company over a similar time period.

While Apple co-founder Steve Jobs resisted calls for return of cash to shareholders, Cook had been more accommodating on the issue.

Although Apple then held cash reserves of over $140 billion, it had said that it plans to borrow money in order to return cash to shareholders.

Most of Apple's cash reserves are held overseas, which would be taxed if it brought the money back to the US and would be cheaper to borrow and repay through profits reaped in the US.

It now has a cash pile of $160 billion and billionaire investor, Carl Icahn, has been pushing Apple to shell out more cash to shareholders.

Icahn, who now holds shares worth around $4 billion in Apple, has asked the to immediately repurchase of $150 billion stock at $525 per share, with a combination of debt and cash on hand to fund the move.

Icahn said the move would immediately raise the earnings per share by 33 per cent (by reducing the share count) and raise the share price to $1,250 within three years.