Airbus suffered an unexpected reversal for its newest aircraft on Wednesday with Dubai's  Emirates cancelling a $16-billion order for the A350, which saw a decline in shares of European plane maker and engine firm Rolls-Royce, Reuters reported. 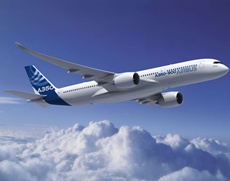 The decision by the carrier's largest customer to cancel all 70 A350s on order comes months ahead of the entry of the long-haul jet and reduces the order backlog for the  plane which took eight years and $15 billion to develop, by 9  per cent.

Airbus said there was no cause for worry over the development. According to its top salesman a number of airlines had immediately expressed interest in buying some of the Emirates aircraft, the first of which was due for delivery in 2019.

However, shares retreated as analysts told investors the move raised questions over aircraft demand, not necessarily over the A350 itself. According to commentators this could be about a wider fall in confidence that could also hurt the carrier's main rival, the US planemaker Boeing.

Acknowledging its disappointment with the loss of the A350's joint second-largest customer, the carrier said it did not see any financial impact and that flight tests were on track.

Rolls-Royce is the sole manufacturer and supplier of the engines for the A350, which is seen as the aircraft maker's answer to Boeing's Dreamliner.

According to the British engineering firm, with bases in Derby and Bristol, the cancellation would hurt its order books 3.5 per cent, but hoped that other airlines would fill the delivery slots.

The company had already warned of stalling profit and revenues on cuts in defence spending. The company's shares were down 2.5 per cent to £10.51 on news of the loss of the Emirates order.

Rolls-Royce said, "Demand for the Airbus A350 remains strong, with more than 700 aircraft and 1,400 Trent XWB engines already sold. We retain a close working relationship with Emirates and continue to support their 38 Rolls-Royce-powered wide body aircraft currently in service."

According to Airbus, the decision came after discussions as Emirates reviewed its fleet requirements.

It said, "Airbus and Emirates benefit from a long-standing relationship and the airline recently reiterated its confidence in Airbus products particularly by praising the A380 and the benefits the aircraft brings to their operations."