A fruitful journey from the attic to an angel investor

Pejman Nozad is the founding managing partner at Pear Ventures. A sports journalist in Tehran, Nozad landed in Silicon Valley almost penniless and homeless. Finding refuge in an attic at the yogurt shop where he worked, he went on to bag a salesperson's job at a rug gallery. From there, Nozad met a community of people who were out to change the world. Eager to join them and be a part of this journey, he soon went on to open a venture fund and has not looked back since. 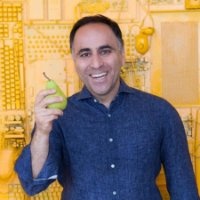 Nozad has over 17 years of experience in investing in early-stage, high-tech start-ups. He has invested in over 100 startups and has seeded several multi-billion dollar companies such as Dropbox, Lending Club, Gusto, Addepar, Danger. Nozad was named by Forbes in 2012 as "one of the most successful angel investors." He co-founded Pear Ventures with Mar Hershenson, to help exceptional entrepreneurs build category-defining companies. The firm embodies Nozad’s ambition and conviction, with integrity, humility, and trust as the central tenets of its operations philosophy. In this interview with Swetha Amit, he talks about the concept behind Pear Venture capital, overcoming several setbacks and his long-term vision.

Pear venture capital has helped some aspiring entrepreneurs build their foundations from scratch. How did the idea behind Pear fructify and what is the significance behind its name?
We actually started out as an angel investor. Around 2009-2010, I felt that there was no institution to help founders from ground zero. Given my background and network, I thought I could build an institution, which would help founders in their early stages to work on their ideas, which would stay in the business for generations. I wanted to materialise this idea with a partner and my current founding partner Mar is a PhD from Stanford University. She has started three companies. I found that she complemented my skills as she possessed expertise in the technical side as well.  However, it took me four years to convince her.

Today Pear is an early stage seed fund and we invest in founders who are building category defined companies and that which focus on solving a big problem in the market. When we initially started this company, my partner suggested that I put my name as everyone knew me by then. So, it was ‘PejmanMar’ initially. However, I thought that if I wanted to build an organization which would last for the next 100 years, it wasn’t a great idea to put my name at the door. I wanted people to work with me and not for me. While scouting out for a new name, I realized that entrepreneurs were like fruits whose ideas needed water and sowing. Pear seemed like an ideal name as being a fruit, it symbolised this concept and is also found in ‘entrepreneur’.

Success is known to emerge only after facing setbacks and overcoming hurdles. Yours was a similar journey when you initially landed in the US from Iran. Could you tell us more about the setbacks you faced and how did you overcome them?
When I came initially from Iran, I didn’t speak the language and I had very little money. I was a famous sports journalist back in my country. It took a little time getting used to the fact that I was a nobody here. However, I had determination and believed that I could create my own destiny. So, I was taking it day by day, ensuring that I was working hard and being kind to other people.

My first job was at a car wash and at that time I just focused on being the best car washer in town even though I knew it wasn’t a job for the rest of my life. Then I landed a job at a yogurt shop where I convinced the owner to let me sleep in the attic. I was in love with a girl from Iran and didn’t want to ask my father for money. So, I spent six months living in the attic just to save some money. Then one day I saw this ad at a Persian carpet store and I called them up. The owner asked if I had sold carpets or furniture before. When I said no, he asked me why I was calling him and almost hung up. I persisted and asked him to see me at least once before he refused. I got the job and from here I started to meet different people and the idea to set up a venture fund came about then.

If you believe that things change for the future and time doesn’t stop, you can easily handle the setbacks that come your way. I just had hope and believed that things would change one day. It certainly did.

So, what are the lessons from the attic that you would like to share?
Well I thought that if I could survive living in an attic, I could survive just about anything. It again goes back to having this positive mentality and telling yourself that this is just a passing phase. It may be hard today but it is bound to pay off at the end of the road. Those six months that I spent at the attic determine the person that I am today. Part of it resonated with me as a founder since I was starting at ground zero and with an element of risk. I have no connection with money and even today the goal is not to make money as much as it is to help people build amazing companies. Money just comes as a result. I would sum up those days in the attic as a boot camp which has made me a better and a stronger person today.

As a venture capitalist, how do you identify potential entrepreneurs before signing them a cheque? What sectors and businesses do you look at? Considering the humongous number of aspirants, how do you identify a viable idea and that which is worth your support and funding?
If I look back at the last 18 years, there are some traits which are quite common among exceptional founders. We like those individuals who are looking to solve big problems in the market. They should either be close to the problem that they are trying to solve or they should have lived through their problem. We also look for people who aren’t tourists, that is people who are not doing this because it’s fashionable but doing it because they are true entrepreneurs.

We also like those who have ability to track talents, are paranoid in a healthy way, have a vision and tend to question themselves every day. I also like CEOs who are captains of the ship,. the ones who usually stay till the end when the ship is sinking. Overall, we also look at size of the market. It’s fine if things don’t work out today as long as it’s going to be massive when it works. If you look at our portfolio companies, some of them have started in the unconventional space. As VCs, you live for those moments where you want to break the rule and partner with outliers.

Since you also built your foundation from scratch, do you feel a lot of empathy for these aspiring entrepreneurs? In that case, how do you place that fine line between the head and the heart while making a decision to fund some of these ideas?
It’s a hard part as you feel emotionally for some of these founders. However, we have the responsibility to raise money as a venture capital firm and we have to return capital to our founders. Keeping all these things in mind, we make the decisions in the best interest of the fund as our responsibility is obviously towards the founder and our investors.

Regarding the incident with the rug gallery, a lot of people would have lost their nerve on hearing the word ‘no’. What kept you persistent enough to convince the owner for a face to face meeting, before you landed with the job?
I learnt that in many instances in life that when you hear the word ‘no’, it means I have to find another way to do it. I looked at it as more opportunities to find a way towards what I wanted. In fact, some of the best things that I have done are after hearing the word ‘no.  In this case of the rug store, it was obvious that the owner didn’t know me and the three questions that he asked over the phone weren’t enough to get to know me. When I actually met him the next day, he recruited me on the spot and the reason he did that was because I did not give up on the phone. He told me this himself.

I strongly believe that when you open your eyes to the world in a positive way, you can turn the most negative things to fruitful ventures. Things change in life. I sold carpets and ultimately became a venture capitalist. I would say I threw myself in middle of the ocean with average swimming skills but I managed to swim to the shore because I knew I had to work hard to reach where I wanted to reach.

You are known to work towards empowering founders through a network and community. Could you elaborate on how you go about doing this? How do you provide that platform for networking?
My whole career in investing started by networking and attending a lot of events. You only do business with people whom you meet. So, we believe in bringing people under one roof for different reasons, really empowering others to get to know one another where some opportunities arise. Some of our best founders are the ones who keep coming to events here and it could be just a simple idea of a get together around food.  We don’t have to make it very complicated. Our network is interactive, engaging and very transparent. You have access to some amazing people. We just ensure that it keeps growing.

How do you see Indian venture capitalist firms, considering that this sub-continent consists of a lot of startup aspirants? Any advice for aspiring entrepreneurs?
I think they need to keep a few things in mind. They should not fear failure. I feel that it’s this fear that prevents many people from trying new things. If you believe in yourself and have the determination, go for it.  Second, you have to find something that you are passionate about. Lastly do not put any ceiling on your dreams. Always remember that sky is your limit.

Pear VC has invested in more than 30 startups including the likes of Doordash, Guardant Health and Gusto. What is your long-term vision for your company?
Well it will be a continuous search for those amazing founders. I am also focused on growing the team. What I would love to see is 100 years down the road, if someone comes to Palo Alto, there is a book about Silicon Valley where a chapter is dedicated to Pear elaborating how it supported founders to build companies that changed the world. Credit should go to these founders of course but that’s the vision I have.