In defence of Duryodhana

V Raghunathan, is currently the CEO of GMR Varalakshmi Foundation and has authored several books.  He taught finance at IIM, Ahmedabad for almost two decades before becoming president of ING Vysya Bank in Bengaluru. 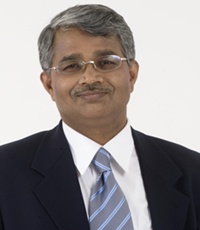 He is also an adjunct professor at the University of Bocconi in Milan, Italy and Schulich School of Business, York University in Toronto, Canada. He has also been writing for leading newspapers and magazines.  In this interview, with Swetha Amit he talks about his advocacy for the character of Duryodhana, what constitutes evil and his upcoming book.

The character of Duryodhana is seen as the epitome of evil cunning. So what prompted you to write a book narrating the great epic of  Mahabharata from his perspective?
Well for starters, even the evil are entitled to present their perspective. So if characters like Arjuna, Krishna, Yudhisthira, Bhima, Draupadi and Karna have presented their perspective of the mythological literature, it occurred to me that I hadn't ever come across Duryodhana's perspective. So there seemed to be a gap over there.

In any case, I always felt that Duryodhana seemed no worse or no better a character than most other key characters of Mahabharata. As I am essentially a non-fiction author, I thought that this presented a good opportunity for me to try my hand at a sort of mythological fiction. Also as a counter-hero of sorts, the character sounded like a good idea. This idea kept developing as I delved deeper into it and that's how the book came about.

The prologue in your book emphasises how Sage Vyasa was prejudiced against the Kauravas because of their grandmother Ambika's attitude towards him. But considering how Ambalika's (Pandavas' grandmother) attitude was no different, why do you think the Pandavas escaped prejudice?
Well, since in the book I am merely playing Duryodhana's advocate, I can defend that easily by saying that Sage Vyasa knew that none of the Pandavas were actually Pandu's sons! So he had no reason to have any grudge against the Pandavas who were hardly related to Pandu by blood. Whereas that was not true with regards to the the Kauravas.

So, that makes my defence for Duryodhana easier by saying Sage Vyasa was prejudiced against the Kauravas.

The word 'focus' with regards to Drona's test mentioned in one of your chapters is seen differently by the protagonist.  So what is your idea of focus - is it the ability to concentrate only one subject or is it the ability to concentrate on that subject and yet keep a vigilant eye on the surroundings simultaneously?
Focus is about bringing your mind to bear on all aspects of a problem. Focus on any one aspect to the exclusion of totality can not only lead to failure but can be positively dangerous, like in a war situation as explained in my book!. Focus is about having a peripheral vision open. As I have mentioned in the hunting chapter in my book, if one were to focus only on that one tiger, one will fail to see the other tiger approaching, which could cost the person his life. Therefore, focus is not just about keeping an eye on one object, but also the ability to keep an eye on the surroundings as well.

In fact, these days, many problems arise only because of the lack of this ability. For example if a politician's focus is only winning votes without keeping in mind the needs of the people, then it can be a disaster. So focus has to be well rounded in a contextual sense.

In one chapter, Duryodhana is seen attacking a tiger to save Bhima. Yet on the same day, he poisons Bhima and drowns him in the river. Could you explain this contrast seen in his personality?
I have explained it in the book actually. Hunting has its own code of dharma. When you are out to hunt, you go by the hunting dharma. When you are trying to protect your kingdom, you go by the Rajdharma.  Duryodhana's plan to kill Bhima was a part of his Rajdharma as seen by a youngster which is – to remove a serious threat to his kingdom.

True to his plan, he decides to execute Bhima, though the method is a little sneaky. But it was based on his understanding of his Rajdharma as a young prince without adequate resources available to remove the impediment to the safety of his kingdom. And I have tried to be consistent with his personality and that he believed his Rajdharma was to kill Bhima

So, why do you think the Pandavas, despite their drawbacks and flaws, were still seen as the epitome of goodness?
I chalk that up to the ''history being written by victors'' angle which the epic consistently portrays. Supposing for instance, the Kauravas had won, they would not have written the history theoretically as though Kauravas were bad and Pandavas were good. They would have highlighted all the negatives of the Pandavas, which I have tried to do from Duryodhana's perspective. Pandavas have been shown to be the victims in the epic. So the entire story of the Mahabharata has been written from the perspective of the victim.

Incidentally to me the Mahabharata is a mega epic of impressive proportions from which one can mine virtually any conceivable human characteristic. I just used the same minefield to mine something different, without putting too heavy a point on it. Over centuries, thousands of scholars and lesser folks alike have given their own interpretations to the epic and its many characters. I just added my own two bit to one of the key characters, who I thought could do with an advocate!

Do you see The Mahabharata with characters with shades of grey or with the extremities of black and white?
As a matter of fact, my original working title of Duryodhana was Duryodhana - just another shade of grey. Then I subsequently dropped the latter half of the title and just called it Duryodhana.  As I have said in the book, pure villains and pure heroes are only found in the old movies. In real life, the worst of the person will be good in some respect and the best of the people will also have their defects.  Even a Hitler may have had this soft side which we may not be aware of. Therefore in reality most people are often found with a shade of grey which is what I have tried to mention and highlight.

Goodness and evil are the two sides of the same coin and purely based on perception, going by your book. So what according to you constitutes evil?
More often than not, evil is always defined with respect to somebody, some side or some society.  During times of war, anybody from the opposing camp represents evil. I am sure from the perspective of the prey animals, the predator animals are evil. But when people like you or me watch The National Geographic channel, we empathise with the predator saying that it has a cub to feed, so it's not all that evil.

However in reality, pure evil in absolute terms is not very common. I could for example describe The Charlie Hebdo killers as pure and absolute evil. One could also define the Pakistani killers of innocent school children as constituting pure and absolute evil.  So while in some context the evil factor is relative, in other cases it does appear that it is absolute evil. Fortunately in real life, the absolute evil is not as much in abundance as relative evil is, which is a good thing in a way.

Your book ends at the episode of the game of dice. Do you plan a sequel to this book in order to understand the further episodes of Mahabharata such as the Kurukshetra war, from Duryodhana's perspective?
In the war it is seen that both sides play dirty as well as display heroism, so the presentation is fairly symmetric. So there is very little opportunity to bring Duryodhana's perspective, post the game of dice. That's why I ended the book where I did, even if the end sounds abrupt. His character has been brought out and that was the purpose of my book - to give the flip side of the character.

I am not a serious scholar of the great Indian epics. Nor is it my major area of interest. I am usually interested in taking slightly unusual look at things. Most of my books Games Indians Play; Don't Sprint the Marathon; Corruption Conundrum; Ganesha on the Dashboard; Locks, Mahabharata and Mathematics are all somewhat in that paradigm. So was Duryodhana. Besides, I don't generally believe in sequels so I am definitely not planning a sequel to my book.

Lastly, do you have any plans to write another book? What can the readers expect next from you?
Yes, I am an author, primarily in the non-fiction category and average about a book a year. My forthcoming book is Beyond the Call of Duty, also with Harper Collins. This is about some Britishers who came to India as young men, fell in love with India and Indians alike and did some outstanding work in India during the colonial era. It is scheduled to be released in August 2015.

( See: Book Excerpt from Duryodhana: Royalty is a full time job, starting rather early in life )