George Fernandes: the end of a fiery, colourful leader

Former defence minister, fiery trade union leader and socialist veteran George Fernandes passed away on Tuesday morning at his home in Delhi. He was 88. 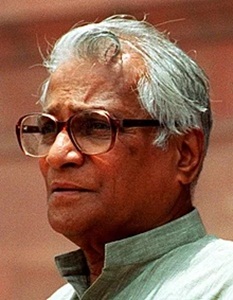 Fernandes, who has been suffering from Alzheimer’s disease for several years, was down with swine flu. According to Jaya Jaitly, his long-time associate, the last rites will be performed on Wednesday at his home after his son returns to India.
The once-fiery trade union leader was born in Mangalore in Karnataka on June 3, 1930. He came to Mumbai in search of a job when he was 19. He struggled in the beginning, sleeping on the pavements and later landed a job as a proof-reader in a newspaper.
Fernandes emerged as a powerful trade union leader in the city in the 1950s and was frequently engaged in verbal and physical battles with goons after he called for strikes. He got elected to the Mumbai civic body in 1961.
The trade union leader made his mark on national politics when he contested the parliamentary elections from Bombay South constituency, unexpectedly defeating the veteran Congress strongman SK Patil. He then joined the Socialist Party and was a senior leader.
The all-India railway strike that he organised in 1974 catapulted him to the national league as a major trade union leader. After the declaration of the Emergency in June 1975, he went underground. Fernandes was arrested in 1976 in Kolkata and charged with smuggling dynamite to blow up government establishments.
In the 1977 elections post the Emergency, though he was in jail, stood for elections and won the Muzaffurpur seat in Bihar with a massive margin of over 300,000 votes over his rival.
He was appointed as the industries minister in the Janata Party regime and soon got into controversies with his threats to throw out American multinationals including IBM and Coca-Cola. Both corporates then packed up from India.
Fernandes joined the Janata Dal in 1988 and became railway minister in Prime Minister VP Singh’s tenure. A few years later he broke away from the party and set up his Samata Party, which soon allied with the BJP.
In the Atal Behari Vajpayee government, he handled the crucial Defence portfolio. But with the UPA coming to power in 2004, he gradually lost his political clout and disappeared from public life.
MORE REPORTS