Ageing astronaut Aldrin now admits to have sighted UFO on moon, had dismissed it in the past

The second man to land on the moon, Buzz Aldrin, who is now 88 years old, passed a lie-detector test and repeated his claim that he had seen a space ship while on his visit to the moon. 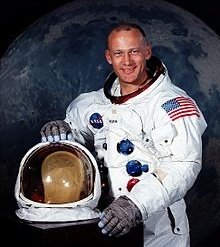 Aldrin and some other ageing astronauts all in their 80s now, claim to have sighted UFOs. All of them were part of a group that took part in a study conducted by the Institute of Bioacoustic Biology in the US.
Aldrin claimed he saw a spaceship on his way to the moon, adding, "There was something out there that was close enough to be observed... sort of L-shaped."
The tests, reportedly more reliable than standard lie detector tests, showed he was telling the truth, the Daily Star reported.
Latest technology was used to determine whether these astronauts were making false claims about aliens, but all their testimonials were found correct. Experts say that these results indicate the presence of alien life somewhere in space.
During the test, researchers carried out a complex computer analysis of these astronauts' voice patterns while they talked about alien encounters. Even though the technology used for these tests still remain a top secret, experts claim that it is much more effective than conventional lie detector tests used by FBI.
In the past, Aldrin has denied that what he saw during the Apollo 11 flight were taken out of context. What he saw on the moon was technically unidentifiable, but was certainly not alien in origin, he had asserted.
He had also explained some time back that the UFO he saw was possibly a panel that came off the space ship on the moon.
Last year, Aldrin disappointed UFO enthusiasts when he clarified that he had observed a light out of the window that appeared to be moving along side with him and Neil Armstrong.
“I feel absolutely convinced that we were looking at the sun reflected off of one of these panels,” he said. “Which one? I don’t know. So technically, the definition could be ‘unidentified.’ ”
MORE REPORTS