Madras HC might order exhumation of Jayalithaa's body for investigation 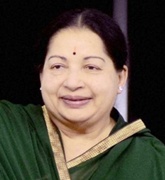 Expressing doubts over the death of former chief minister J Jayalalithaa, the Madras High Court indicated that it might order exhumation (to dig a dead body) of Jayalalithaa's body and examine it for further investigation.

The High Court expressed concerns over the circumstances of her death, following a plea filed before the court seeking a probe by an inquiry commission or a fact-finding committee.

Justice S Vaidyanathan, who was heading a two-judge vacation bench, said the public had a right to know. ''One day it was told that she is walking, another day you said that she will come out and suddenly what happened. Even with regard to the health of late chief minister MGR, video was released,'' Vaidyanathan said.

Vaidyanathan asked the AG, ''What is that you say. Right to live is a Fundamental Right. Public should know what has happened,'' he added.

''Even relations were not allowed to see and they are also not before the court now. I personally find in case if I have doubt I may order exhumation of the body of deceased and you have not told anything when she was alive,'' the judge said.

''You went there. You have not reported anything. You know everything. But not reported anything for the reasons best known to you. You kept quiet,'' the judge asked Madanagopala Rao, who appeared on behalf of union government. ''We also saw in newspapers that the chief minister was recovering, and that she was eating, signing papers and even conducting meetings. And then suddenly she was dead,'' said the bench.

Meanwhile, Apollo Hospitals today informed the Madras High Court that it was ready to submit details of treatment provided to former chief minister J Jayalalithaa in a sealed cover. The submission was made by the counsel for the hospital, on a petition seeking probe into the treatment of Jayalalithaa came up for hearing before the first bench of chief justice Sanjay Kishan Kaul and justice S Sundar.