Former Lok Sabha Speaker PA Sangma passed away today. He died of a heart attack at his Delhi residence. 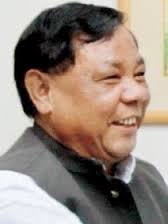 Sangma, who unsuccessfully contested the presidential election as an opposition candidate against Pranab Mukherjee, was 68 years old.

Prime minister Narendra Modi mourned the passing away of Sangma whom he called a ''self-made leader'.'

In a series of tweets, the Prime Minister shared his views about the departed Naga leader and his close association with him.

''Shri P A Sangma was a self-made leader whose contribution towards the development of the Northeast is monumental. Saddened by his demise,'' the PM tweeted.

Lok Sabha Speaker Sumitra Mahajan and other members of the House also condoled the passing away of Sangma and hailed him as a ''very popular mass leader''.

As a mark of respect for Sangma, the Lok Sabha was adjourned for the day and it will now reconvene on Tuesday.

The former Meghalaya chief minister was elected to the Lok Sabha eight times since his first entry to the lower house in 1977. He was the Lok Sabha Speaker between 1996 and 1998.

Sangma was expelled from the Congress in 1999 along with Sharad Pawar and Tariq Anwar for raising a revolt against the leadership Sonia Gandhi over her foreign origin issue. Subsequently, the trio formed the Nationalist Congress Party (NCP).

However, Sangma left the NCP in 2004 and formed a regional party, which later merged with Mamata Banerjee's Trinamool Congress. He later rejoined the NCP, but only to part ways with it again. He contested the presidential election against Pranab Mukherjee and lost, though he was supported by the now-ruling Bharatiya Janata Party, BJD, AIADMK and others.

Humble origins
Purno Agitok Sangma was born on 1 September 1947 in village Chapahati in the picturesque West Garo Hills District of the State of Meghalaya in North East India.

Growing up in the small tribal village, young Sangma realised early in life that he would have to struggle hard to rise in life.

Inspired by his mother who inculcated in him the values of diligence, humility and honesty, he learnt that education was the only way to progress in life.

After completing his graduation from St. Anthony's College, he went to Dibrugarh University in Assam for his masters' degree in International Relations.

Subsequently, he also obtained a degree in law.