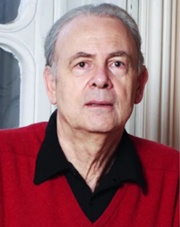 The Nobel Prize in Literature for 2014 has been awarded to French author Patrick Modiano "for the art of memory with which he has evoked the most ungraspable human destinies and uncovered the life-world of the occupation".

The award carries a cash prize of 8 million kronor ($1.1 million Cdn) and a citation.

Patrick Modiano was born on 30 July 1945, in Boulogne-Billancourt, a suburb of Paris. His father was and his mother an actress.

His father was a businessman of Jewish Italian origins who met his Belgian actress mother during the occupation of Paris - and his beginnings have strongly influenced his writing.

Having left school, he studied at Lycée Henri-IV in Paris, where his teacher in geometry was Raymond Queneau, a writer who was to play a decisive role for his development.

Modiano wrote his first book La place de l'étoile, a novel that attracted much attention, in 1968. Jewishness, the Nazi occupation and loss of identity are recurrent themes in the novel, which was later hailed in Germany as a key Post-Holocaust work.

His works centre on topics such as memory, oblivion, identity and guilt. His stories are more often built on an autobiographical foundation, or on events that took place during the German occupation.

He sometimes draws material for his works from interviews, newspaper articles or own notes which he has accumulated over the years.

His novels show an affinity with one another, and it happens that earlier episodes are extended or that persons recur in different tales.

The author's home town and its history often serve to link the tales together. The city of Paris is often present in the text and can almost be considered a creative participant in the works, the awards committee noted.

A work of documentary character, with World War II as background, is Dora Bruder (1997; Dora Bruder, 1999) which builds on the true tale of a fifteen-year old girl in Paris who becomes one of the victims of the Holocaust.

Among the works which most clearly reveal an autobiographical character one notes Un pedigree from 2005.

Modiano has also written children's books and film scripts. Together with the film director Louis Malle he made the feature movie Lacombe Lucien (1974), enacted during the German occupation of France.