US billionaire and Microsoft founder Bill Gates has boosted his stake in Canadian National Railway Co (CN) to approximately 12 per cent by acquiring additional 13,670 shares of the company for $1.25 million, thus becoming the rail operator's largest shareholder. 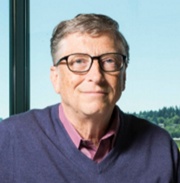 Bill Gate's investment firm Cascade Investments LLC bought the additional shares of CN bringing up its stake to 10 per cent.

Besides, the Bill and Melinda Gates Foundation Trust, also controlled by Bill Gates, owns about 2 per cent in CN or 8.6 million shares.

Together, Gates and the foundation control about 12 per cent of CN or 51.7 million of the company's outstanding shares worth around $4.7 billion based on Tuesday's closing price of $90.36 per CNR share on the Toronto Stock Exchange.

The stake increase brings Gates closer to the 15-per cent limit stipulated by the government for any one investor.

Montreal-based CNR is a leader in the North American rail transport industry. Over the past, the company had expanded its network through the acquisition of rail networks of Illinois Central in 1999, Wisconsin Central in 2001 and Great Lakes Transportation in 2004 besides having a partnership agreement with British Columbia Railway, provides shippers with more options and greater reach in the rapidly expanding North-South trade.

For the third quarter, CNR reported revenue of C$2.5 billion, up 8 per cent compared to last year. Net income for the period was C$664 million, compared with C$659 million for the same quarter last year.

Separately, Cascade also acquired three million additional shares of farm equipment maker Deer & Co, raising its stake to 7 per cent or 27.5 million shares, according to a filing Tuesday with the US Securities and Exchange Commission.

The investment company has not revealed any specific reason for increasing the stake in Deere, but it has been observed that nearly one-third of the machinery manufacturer's shares have been bought in the past two months.