The National Aerospace Administration (Nasa) is all set to launch its Mars 2020 rover, which will not only search for traces of ancient life, but pave the way for future human missions, Nasa scientists said Friday while unveiling the vehicle. 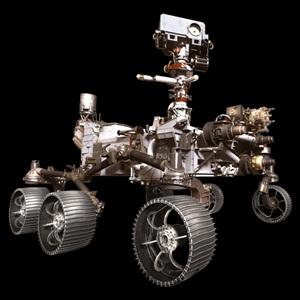 The Mars 2020 Rover is based on the Mars Science Laboratory's Curiosity Rover configuration. It is car-sized, about 3 metres long (not including the arm), 2.7 metres wide, and 2.2 metres tall. But at 1,050 kilograms, it weighs less than a compact car.
In some sense, the rover parts are similar to what any living creature would need to keep it "alive" and able to explore.
The Rover, constructed in a large, sterile room at Nasa’s Jet Propulsion Laboratory in Pasadena, near Los Angeles, has also undergone its first successful test. It was also shown to invited journalists on Friday.
The launch of the Rover, the fifth by Nasa, is scheduled in July 2020 from Florida's Cape Canaveral, to land on Mars seven months later in February.
Fuelled by a miniature nuclear reactor, Mars 2020 Rover has seven-foot-long articulated arms and a drill to crack open rock samples in locations scientists identify as potentially suitable for life.
It will crack open potential sites to look for ancient microbial life, which would have existed on Mars billions of years ago,, when the planet was much more Earth-like.
Approximately the size of a car, the rover is equipped with six wheels like its predecessor Curiosity, allowing it to traverse rocky terrain. It can cover around 200 yards per Martian day approximately the same as a day on Earth.
State-of-the-art scientific instruments meant for acquiring information about Martian geology, atmosphere, environmental conditions, and potential biosignatures, include:
Mastcam-Z  - an advanced camera system with panoramic and stereoscopic imaging capability with the ability to zoom. The instrument also will determine mineralogy of the Martian surface and assist with rover operations, developed by the Arizona State University, Tempe, AZ, USA.
Mars Environmental Dynamics Analyzer (MEDA) - a set of sensors that will provide measurements of temperature, wind speed and direction, pressure, relative humidity and dust size and shape, developed by Centro de Astrobiologia, Instituto Nacional de Tecnica Aeroespacial, Spain.
Mars Oxygen ISRU Experiment (MOXIE) -  an exploration technology investigation that will produce oxygen from Martian atmospheric carbon dioxide, developed by the Massachusetts Institute of Technology, Cambridge, MA, USA.
Planetary Instrument for X-ray Lithochemistry (PIXL) - an X-ray fluorescence spectrometer that will also contain an imager with high resolution to determine the fine scale elemental composition of Martian surface materials. PIXL, developed at NASA's Jet Propulsion Laboratory (JPL), Pasadena, CA, USA, will provide capabilities that permit more detailed detection and analysis of chemical elements than ever before, according to Abigail Allwood, Principal Investigator
Radar Imager for Mars' Subsurface Experiment (RIMFAX) - a ground-penetrating radar that will provide centimeter-scale resolution of the geologic structure of the subsurface, developed by Forsvarets Forskningsinstitutt, Norway.
Scanning Habitable Environments with Raman & Luminescence for Organics and Chemicals (SHERLOC) - a spectrometer that will provide fine-scale imaging and uses an ultraviolet (UV) laser to determine fine-scale mineralogy and detect organic compounds. SHERLOC, developed at NASA's Jet Propulsion Laboratory (JPL), will be the first UV Raman spectrometer to fly to the surface of Mars and will provide complementary measurements with other instruments in the payload.
SuperCam - an instrument that can provide imaging, chemical composition analysis, and mineralogy. The instrument, developed atthe Los Alamos National Laboratory, Los Alamos, NM, USA, will also be able to detect the presence of organic compounds in rocks and regolith from a distance. This instrument also has a significant contribution from the Centre National d'Etudes Spatiales, Institut de Recherche en Astrophysique et Planétologie (CNES/IRAP) France.
MORE REPORTS