New Delhi: At the Mobile Asia 2008 event currently underway in the capital, mobile and electronics major Samsung has announced the launch of its latest range of mobile handsets.

The new Samsung handsets are targeted at different consumer segments. The company has showcased 18 new models at the Mobile Asia 2008.

Speaking on the sidelines of the event, Suni Dutt, country head, Samsung Telecommunications, said "We are using the Mobile Asia platform to launch a series of new sleek and stylish Samsung mobile phones that exemplify cutting-edge technology and design innovation. The unique and clearly differentiated features of these phones makes the Samsung 2008 mobile range the complete answer to consumer needs across different segments of the market."

The range includes the Samsung SGH i450, the company's Multimedia Phone range in the Music Phone segment. The phone provides a mobile theatre experience. To boost the quality of sound, the i450 uses ICE Power amplifiers by audio major Bang & Olufsen.

Storing, accessing and juggling music on the SGH i450 is a breeze, and the phone gives the user a new high listening to music. The phone is has a 2.4-inch LCD screen, and comes with a built-in internal memory of 40 gigabytes (GB). It is expected to be priced around Rs15000,

Samsung says that the SGH-G800 is the world's first mobile phone to have a 5-megapixel camera, with 3x optical zoom. The G800 is a sleek camera phone, and part of the Metal series launched by Samsung. The sleek phone resembles a streamlined digital camera morphed with a fashionable mobile phone. 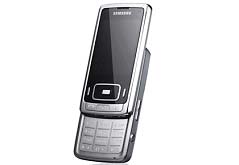 The phone has advanced camera features, such as multiple face detection, Xenon flash and Wide Dynamic Range (WDR), proving to be a very easy tool for sharing images and videos. Price is estimated in the range of Rs21,799.

In the lifestyle category, Samsung is showcasing the Samsung Soul. The Samsung Serenata is displayed, and provides users with a true music experience. Samsung's Armani phone is also on display at Mobile Asia 2008.

With Samsung and Bang & Olufsen as partners, superior sound quality is now a given in Samsung's new range of music phones