Researchers at the Rutgers University in the United States used software, algorithms to get a robotic arm tightly pack items into a box for shipment, helping to advance warehouse efficiency. 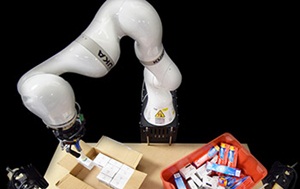 In the research, funded by the National Science Foundation, a team of computer scientists at Rutgers University used artificial intelligence to control a robotic arm, thereby providing a more efficient way to pack boxes that will save businesses time and money.
While deploying robots to perform logistics, retail and warehouse tasks is a growing trend in business, the NSF release said, “Tightly packing products picked from an unorganised pile remains largely a manual task, even though it is critical to warehouse efficiency. Automating such tasks is important for companies’ competitiveness and allows people to focus on less menial and physically taxing work.”
For the study, the team used a robotic arm to move objects from a bin into a small shipping box and tightly arrange them. The researchers developed software and algorithms for the robotic arm and used visual data and a simple suction cup that doubles as a finger for pushing objects. The resulting system can topple objects to get a desirable surface for grabbing them and use sensor data to pull objects toward a targeted area and push objects together. It is designed to overcome errors during packing.
The scientists' peer-reviewed study was published recently at the IEEE International Conference on Robotics and Automation, where it was a finalist for the Best Paper Award in Automation.
The research was supported by the Robust Intelligence program in NSF's Division of Information and Intelligent Systems. RI encompasses the broad spectrum of foundational computational research needed to understand and enable intelligent systems in complex, realistic contexts, the release added.
MORE REPORTS