More reports on: In the news, Government, Mining

The Central Bureau of Investigation (CBI) on Tuesday filed an FIR against its former director Ranjit Sinha in connection with alleged corruption in the investigations into the coal blocks allocation case. 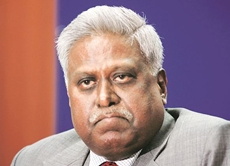 The former CBI chief is accused of "scuttling" and "influencing" the probe into the coal block allocation cases by meeting the accused persons.

Sinha is the second CBI director to be probed by agency itself after A P Singh, who was booked by the agency for corruption charges along with meat exporter Moin Qureshi.

The CBI filed a First Information Report against Sinha under the Prevention of Corruption Act Section 13 (2), which deals with "criminal misconduct" and Section 13 (1) (d), pertaining to abuse of official position and corruption while holding a public office.

A bench of Justices Madan B Lokur, Kurian Joseph and A K Sikri directed current CBI chief Alok Verma to set up a three-member special investigation team to investigation Sinha, against whom Advocate Prashant Bhushan had sought a probe.

Sinha is accused of influencing investigation in the coal block allocation case when he was heading the agency. The move came three months after the Supreme Court ordered the CBI to constitute a special investigation team to look into the allegations against Sinha.

Ranjit Sinha allegedly met the accused at his residence as evidenced in the diary report of the housing society where he was staying at that time. The Supreme Court had held that it was completely inappropriate for Ranjit Sinha to have met persons accused in the coal block allocation case without the investigating officer or the investigating team being present.

The apex court had on 21 September 2015, ordered an inquiry into the matter and the CBI had constituted a team headed by M L Sharma, former special director, CBI, to probe the matter.

Sharma submitted a detailed report to the Supreme Court and a special investigative team (SIT) of the CBI had since looked into the report and other relevant documents and conducted an investigation into the abuse of authority prima facie committed by Ranjit Sinha.

The agency had registered three preliminary enquiries (PEs) against unknown public servants, inter alia, of the offences relating to allocation of coal blocks for the period from 1993 to 2005 and 2006 to 2009 and total 54 regular cases have also been registered against public servants and private persons.

The Supreme Court had, on 24 March, dismissed a plea by Sinha seeking recall of its earlier order constituting an SIT to probe the allegations of prima facie scuttling the investigation in coal scam cases.

A three-judge bench headed by Justice Madan B Lokur had said there were no reasons to recall the 23 January order, in which the apex court had observed that a prima facie case was "definitely" made out for probing allegations of abuse of authority by Sinha when he was the CBI director.

The former CBI chief is accused of ''scuttling and influencing'' the probe into the coal block allocation cases in connivance with the accused persons.

The CBI has registered case against Ranjit Sinha under sections 13 (2), which deals with "criminal misconduct" and section 13 (1) (d), pertaining to abusing official position while holding a public office and indulging in corruption, of the Prevention of Corruption (PC) Act 1988.

If convicted, Sinha may face a maximum imprisonment of seven years in the case.

''In view of the orders of the Supreme Court dated 23 January 2017 vide which CBI was instructed to conduct an investigation (as a Special Investigating Team) into the abuse of authority prima facie committed by Ranjit Sinha with a view to scuttle enquiries, investigations and prosecutions,'' DNA reported the FIR as stating.