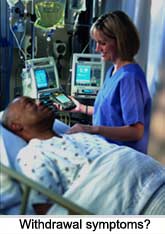 Heparin is a vital drug that is used in various medical and surgical procedures. Baxter had delayed the full recall for six weeks on the advice of the FDA, which wished to ensure that another US manufacturer, APP Pharmaceuticals, would be able to ramp up production to avoid a shortage. The company had already stopped manufacturing these products earlier in February.

The recall once again brings the safety of Chinese products imported into the US into the limelight. This time the controversy revolves around a Chinese plant, Changzhou SPL, near Shanghai, which is behind half of America's supplies of heparin. The Chinese unit is a joint venture of Waunakee, Wisconsin, based Scientific Protein Laboratories LLC.

The US Food and Drug Administration found the heparin products to contain impurities caused by "potential deficiencies" at the Chinese plant that supplied much of the active ingredient for the drug. References have been made to impurities, the quality and use of equipment, and lack of quality control.

FDA inspectors referred to "at least one instance" of the company using active ingredients made from pig intestines supplied by a workshop, which were considered "unacceptable". It turns out that the FDA inspection was not done at the Chinese plant designated for these supplies to Baxter but at another plant.

The FDA has issued an update on the recall, informing the public that Baxter Healthcare has extended its recall to single-dose as well as multi-dose vials of heparin sodium for injection. It said that as a precautionary measure Baxter was also recalling its heparin lock flush products since the ingredients for these products come from the same Chinese source that supplies ingredients for Baxter's heparin sodium for injection.

The 'drug shortages team' at FDA has been working closely with APP, the other US supplier of heparin multi-dose and single-dose vials, to ensure that APP can now adequately supply the US market. The FDA has also confirmed that there are multiple US suppliers of heparin lock flush products with substantial inventory, making a shortage of these products unlikely.