Bankrupt German high-end television maker Loewe AG is looking for a new investor after a consortium of investors backed out from buying most of its assets. 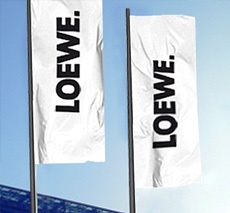 Six months after it filed for bankruptcy protection, investors including a German businessmen and former manager at Apple, Jan Gesmar-Larsen, offered to bail out Loewe by buying most of its assets. (See: Former Apple and Bang & Olufsen management buy German television maker Loewe)

Kronach, Bavaria-based Loewe filed for bankruptcy protection in July last year after posting losses three years in a row in face of stiff competition from Asian manufacturers like Samsung, Sony and LG.

The investors, comprising of real estate entrepreneurs Constantin Sepmeier and Stefan Kalmund, and former Apple manager Gesmar-Larsen were to open a new company called Panthera GmbH for the acquisition. Ex Hewlett-Packard manager Peter Orre was to head the company in place of Loewe CEO Matthias Harsch.

As part of the deal, Loewe's headquarters would move from Kronach to Munich, cutting nearly 150 jobs from the remaining 550.

Loewe yesterday said that the consortium had informed it that it plans to withdraw from the contract, but Loewe threatened to take legal action to force the investors to complete the deal.

Loewe said that it had already started talks with another investor, who had tabled an offer.  "If we can reach an agreement quickly, we may yet be able to secure the future of Loewe," said, Rolf Rickmeyer, Loewe's CFO in a statement.

In 2008, it brought out a new digital television where non-system end devices could be connected to a flat screen television set, and in 2010, it introduced the Mediacenter, a futuristic entertainment networking system for the entire home.

Japanese electronics company Sharp is its largest shareholder with a stake just under 30 per cent.

Loewe posted fiscal 2012 loss of €29 million on revenues of €250 million. Over half of the company's turnover is generated on the international market, with the largest growth countries being Austria, Benelux, France and Switzerland.

Despite having excellent elegant and futuristic looking products under its portfolio, the company has not been able to sell its products well either in the domestic or international market, mainly because its products are three times more expensive than those of its Asian competitors.

Last May, web blog AppleInsider reported that technology giant Apple had made a $113-million buyout offer for Loewe. Though no such bid was tabled, but the story gained credence since Apple has long been rumoured to be working on launching an interactive TV. (See: Rumours of bid by Apple sends shares of German luxury TV maker Loewe zooming)