Prime Minister Narendra Modi on Friday made a strong pitch for re-establishing Varanasi's textile industry on the global map by revitalisation of its traditional arts and crafts through modernisation and handholding. 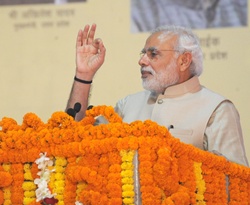 Speaking after laying the foundation stone of the Trade Facilitation Centre and Crafts Museum, and inaugurating the Powerloom Service Centre in the city, the prime minister said the central government is working towards revitalising the textile sector through a scientific approach, coupled with infusion of appropriate technology.

Addressing a gathering of over 2,000 people at Varanasi, his Lok Sabha constituency, Modi also announced a Rs2,375-crore package for 16 sick cooperative banks to make loans easily available for the region's weavers.

The Rs150-crore centre is expected to come up in 18 months, at Lalpur on the outskirts of the city.

''Our artisans will be provided training here, near their own city, in modern designing methods, marketing strategies and all the skills that may be necessary for them to remain competitive and responsive to the requirements of a modern consumer,'' he said in his first visit to the holy city after becoming prime minister.

He said the facilitation centre that was envisioned in Varanasi, was the beginning of a comprehensive vision for the sector, which would encapsulate the heritage of Varanasi all at one place.

The prime minister said the industry should try to understand the changing demands and needs of the customer, and create new products which satisfy his need, to retain the customer.

Narendra Modi, who is on a two-day visit to Varanasi, said ladies in every family in India had heard of the term "Banarasi Saree." Every mother wanted to gift a Banarasi saree to her daughter for her wedding. He asserted that this represents an assured market of crores of sarees for Varanasi. The requirement now is to meet this demand and satisfy the customer with modern design, products and service.

''Every mother has a dream to gift at least one Benarasi saree to her daughter in marriage and about 20 crore marriages take place in the country every year,'' he said after laying the foundation stone of a trade facilitation centre and crafts museum for weavers.

''It needs no marketing. You have to just tap the huge market already available across the country.''

Observing that after agriculture, textiles was the sector which generated maximum employment, the prime minister said that textile workers weave not just cloth; but through the harmonious nature of their workplace, they also weave the fabric of a cohesive, harmonious society. He said this "Ganga Jamuni tehzeeb" was Varanasi`s heritage, and indeed the heritage of India.

He narrated an anecdote of how he had seen a "Banaras street" in Boston, USA. This was a street where "Gurus" lived, he said, adding that the whole world knows of the heritage of Banaras. He exhorted the people of the city to now use e-commerce and strategically tap the global market. He called upon people to work towards creating a modern, active, vibrant, forward-looking Banaras.

The Prime Minister also visited an exhibition showcasing the traditional arts and crafts of Banaras.

Uttar Pradesh governor Ram Naik, and the union minister of state (independent charge) for textiles Santosh Kumar Gangwar were present. The prime minister specifically thanked Ahmad Hasan, minister in the Uttar Pradesh government, for being present on the occasion.