The government has further amended the Mines and Mineral Development and Regulation Act, 1957, subsequent to the introduction of the auctioning system through amendments made in 2015, in order to smoothen the auctioning process and remove rigidities in end-use conditions.

The net worth for prospective bidders has been reduced from Rs4 crore to Rs0.5 crore. Earlier, for an average annual production of up to Rs2 crore, the net worth required was Rs4 crore.

For an average annual production up to Rs20 crore the net worth required was Rs40 crore, which has been reduced to Rs10 crore.

For small bidders the value of unencumbered immovable property can also be taken in net worth, thus allowing larger participation. Provisions have also been made to discourage squatting on bid-out leases.

In the amended rules, miners will be able to dispose of 25 per cent of dumps that are not used for captive purposes. This will help achieve zero waste mining and utilisation of minerals even in low-grade ore.

This provision will, however, apply only to mines that would be granted through auction after 30 November 2017, ie, the date of publication of the amendment rules.

The amended rules also provide for adjustment of the upfront premium against the due payments of miner at the earliest. This would increase the liquidity of the mining entities at the most stressed time, ie, when production begins. This will further ease their capacity to carry out the business.

Under the old rules the process of auction was annulled if there are less than 3 bidders and this process used to be carried out for 3 rounds at least. Only in the fourth round flexibility was allowed.

Each round of auction carries on for 3 months at least and this resulted in many blocks getting annulled time and again.

While a minimum of three bidders is still stipulated in first attempt to auction, in the amended rules, the states now have the flexibility of allocating the block in the second round itself even if there are less than three bidders. This will make the auction process less cumbersome and will help states auction mineral blocks quickly, says an official release.

Earlier, the state used to prescribe end use conditions on miners and it was very rigid. This resulted in inefficient mining as many mines with low grade ore dumps were saddled with this burden as they could neither use it for captive purpose nor could dispose it of.

The changes in the concession rules for major minerals (other than coal, petroleum and natural gas) helped in successfully auctioning and allocating 33 coal blocks to various bidders. The centre raised about Rs169,000 crore from the auction while revenue to states over lease period is estimated at Rs128,000 crore. The auctioning helped raise an additional revenue of Rs99,000 crore.

However, 60 auction attempts failed during this period. On a review of the amended rules, it was found that the auction rules needed to be amended to make the process more pragmatic without sacrificing the checks on successful bidders.

Accordingly, the Mineral Auction Rules have been further amended on 30 November 2017. 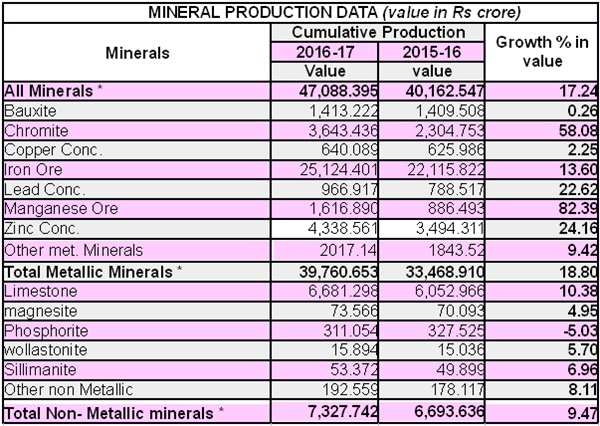