Singapore/Shanghai: Indian iron ore prices went up half a per cent on Wednesday in China on supply worries after India's top ore producing state said it was considering banning exports.  India is the world's third-largest iron ore supplier and exports about half of its annual output of around 200 million tonnes, mostly to China. 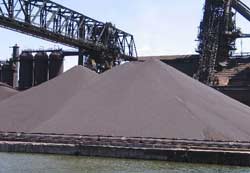 The eastern Indian state of Orissa now intends to regulate export of iron ore and chrome both abroad and at home. The move is contemplated keeping in mind the future requirement of minerals in the state, particularly after signing about 80 MoUs with different companies for setting up steel, aluminium, cement and power plants in the state.

"I have accepted a proposal from the industries department on putting restriction on export of iron ore and chrome," state's steel and mines minister Raghunath Mohanty said.

The industries department also suggested regulation of private mines exporting minerals to other states and abroad, he said.

According to Mohanty, if there was no regulation on the export of minerals, mostly iron ore and chrome, industries within the state could face shortage of raw materials in coming days. He also said the proposal would soon be sent to the chief minister for approval.

Mohanty also indicated that the department had also suggested restriction on export by private mines. "Private mines should be asked to sell 60 per cent of their production within the state and rest to other states," he said.