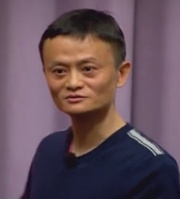 Media reports on talks between Jack Ma and SCMP on a possible acquisition surfaced about three weeks ago. (See: Alibaba's Jack Ma in talks to buy Hong Kong newspaper)

Apparently, Jack Ma, the Chinese business magnate and founder of Alibaba, is following the footsteps of Jeff Bezos of US e-commerce giant Amazon.com Inc in acquiring troubled print media assets for their revival.

Bezos bought the Washington Post in 2013 at a time print media struggles to compete with web-based competitors for advertising. Three years ago, Chris Hughes, one of the co-founders of Facebook Inc, bought a majority stake in the New Republic magazine.

The group's executive vice chairman Joe Tsai commented: ''Our vision is to expand the SCMP's readership globally through digital distribution and easier access to content.

"The South China Morning Post is unique because it focuses on coverage of China in the English language. This is a proposition that is in high demand by readers around the world who care to understand the world's second largest economy," he said.

Regarding editorial independence of the publications, Alibaba said SCMP will be objective, accurate and fair in reporting the news.

''Day-to-day editorial decisions will be driven by editors in the newsroom, not in the corporate boardroom,'' the company said.

SCMP Group, establish 112-years ago, has been reporting declining profits for the past four years due to rising demand for online content from consumers and fall in advertising revenue.

Last year, SCMS posted a profit of $18 million on revenues of around $155 million.

The company's stock has been suspended from trading since February 2013, after it failed to have at least 25 per cent of shares held by minority investors, the minimum proportion required for a company to trade its shares in Hong Kong.

In 1993, Malaysian billionaire Robert Kuok's Kerry Group acquired 35-per cent stake in SCMP from media baron Rupert Murdoch and later increased its holding to 65 per cent in 2008, before reducing it to 51 per cent a year later.

According to some analysts, Kuok has lost interest in the publisher, while Jack Ma is expected to strengthen it to enter the digital world.

The deal will combine the heritage and editorial excellence of the SCMP with Alibaba's digital expertise. It is expected that Alibaba will invest in additional resources to make the business stronger, Alibaba said.

Alibaba Group, founded in 1999, is an e-commerce giant, and in addition to operating China's largest online marketplace for small businesses Alibaba.com, the group's businesses include other leading online shopping destinations and market places, travel platforms and cloud computing services. The group's annual turnover is around $12 billion.