A huge manhunt is under way in Paris after at least 12 people were killed and seven injured in a shooting considered a terrorist attack at the offices of French satirical magazine Charlie Hebdo. Four of the wounded are in a critical condition. 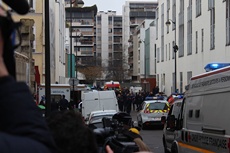 Two of those killed were police officers, official statements said.

Hooded gunmen stormed the Paris offices of the weekly magazine known for lampooning radical Islam in the most deadly militant attack on French soil in recent decades.

The attack took place during the magazine's weekly editorial meeting. The editor Stéphane Charbonnier and three other cartoonists are reported to have been killed.

Witness Benoit Bringer said the attack started at 11.30 am local time: ''Two black-hooded men entered the building with Kalashnikovs (automatic assault rifles). A few minutes later we heard lots of shots.'' He added the men then fled the building.

One of the men was captured on video shouting "Allah!" as four shots rang out. Two assailants were then seen on video footage calmly leaving the scene; and they remain at large.

Charlie Hebdo (Charlie Weekly) is renowned for courting controversy with satirical attacks on political and religious leaders and has published numerous cartoons lampooning the Prophet Mohammad. The last tweet on its account mocked Abu Bakr al-Baghdadi, the leader of the militant Islamic State, which has taken control of large swathes of Iraq and Syria.

French interior minister Bernard Cazeneuve in a statement to the media talked about the hunt for ''trois criminels'', confirming there were three attackers.

The government said it was raising France's security level to the highest notch and the prime minister's office confirmed extra security has been put in place at official buildings, media offices, churches and department stores.

'Terrorist attack': Hollande
"This is a terrorist attack, there is no doubt about it," President Francois Hollande told reporters after rushing to the scene of the attack. His government raised France's security level to the highest notch and scheduled an emergency cabinet meeting.

The gunmen fled towards the eastern Paris suburbs after holding up a car, police officials said.

"There is possibility of other attacks and other sites are being secured," Police union official Rocco Contento said.

Sirens could be heard across Paris as Prime Minister Manuel Valls said security would be ramped up at transport hubs, religious sites, media offices and department stores.

The White House said US security officials were in contact with their French counterparts.

"If the perpetrators are still at large, we're going to track them down, and we're going to work with the French to do that," a White House spokesman said.

Another 20 people were injured in the attack, including four or five critically. Police union official Contento described the scene inside the offices as "carnage".