In a development that could transform heart treatment in India, Gujarat-based interventional cardiologist Dr Tejas Patel has developed robotic technology for coronary intervention, a first in Asia. 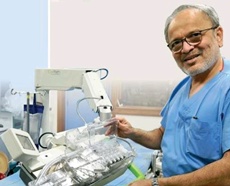 Dr Patel has started robotic-assisted stenting on heart patients in his Apex Heart Institute in Ahmedabad.

''So far, we have successfully conducted more than 50 angioplasty surgeries since commercial installation of vascular robotic system,'' Dr. Patel told the media, announcing that the new method of treatment is likely to revolutionise how cardiovascular diseases are treated in the country.

He added that this is the first and the only Vascular Robotic system outside the United States.

''With the help of robotics, we get higher rate of accuracy and precision in carrying out stenting and other complex surgeries,'' he said.

''It will also lead to tele-stenting (ability to stent patients at remote locations),'' he added.

The US Food and Drug Administration (FDA) has approved robotic technology for coronary angioplasty or stenting, which provides accuracy of sub-1 millimetre, as against a maximum 5-10 millimetres possible in the case of the normal procedure.

The robotic system comprises of three parts - a cath-lab integrated robotic arm, a cockpit from where the cardiologists will command the robot through joystick, and a replaceable cassette that carries the clinical materials for each individual case requirements.

The first robotic-assisted stenting was performed via right dorsal transradial access by Dr Patel with his partner Dr Sanjay Shah. So far the duo has performed operations using CorPath GRX for complex cases such as patients with acute myocardial infarction (AMI) and chronic total occlusion (CTO).

''It is a little costlier than normal procedure done manually, but we are keen to popularise the use of new technology so we will support those patients who can't afford it and will also train cardiologists to adopt the new technology,'' said the Padma Shri award-winning Dr Patel.

Dr Patel is a pioneer of the transradial access technique (angioplasty/stenting through the wrist artery), and has trained over 5,000 cardiologists in this technique. He is also working on the possibility of remotely performing operations using the robotic technology. An experiment in this regard is under way at Mayo Clinic in Rochester, Minnesota where he is involved with a team of experts from Mayo.

In India, an estimated 50 million people are suffering from the heart diseases, while only 500,000 angioplasty surgeries were conducted in 2016, suggesting a huge scope for widening of the treatment.