More reports on: In the news, HRD, Diageo 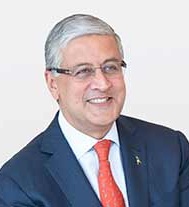 British liquor giant Diageo today announced the appointment of Indian-origin Ivan Menezes as its next chief executive officer after current CEO Paul Walsh steps down on 30 June this year.

Diageo, the maker of Smirnoff vodka and Johnnie Walker Scotch, said Walsh, 57, would opt out of the company's board at the annual general meeting in September 2013, adding, however, that he will retire from the company on 30 June 2014.

''Ivan Menezes will be appointed chief executive of Diageo with effect from 1 July 2013. Paul Walsh, who will step down from the board at the September 2013 annual general meeting, will retire from the company on 30 June 2014.'' Diageo said, adding, ''In the last 12 months he will focus on transitioning critical partner and external relationships to Ivan. These will include those relationships essential to recent acquisitions.''

''Paul is an outstanding chief executive. He has served our business, its shareholders, employees and partners with enormous imagination and dedication over the past 13 years. I know he is justly proud of Diageo and its people and he leaves a great legacy for his successor. The board is immensely grateful for his ambitious and thoughtful stewardship of the business and its people. The transition process, which has been put in place, enables Paul to contribute his knowledge and experience during Ivan's first year as chief executive officer,'' Franz B Humer, chairman of Diageo, said.

''We are delighted to have a leader of Ivan's talents and global experience to succeed Paul.  The handover is being made at a time when the business is strong and Ivan takes on the role of CEO at an exciting stage of the company's global development.  The board is confident that Ivan will inspire our organisation and Diageo will continue to achieve our medium-term,'' he added.

Menezes's selection comes at a time when Diageo has made a major deal to acquire a majority stake in India's biggest spirits maker United Spirits.

An alumnus of Indian Institute of Management-Ahmedabad, Menezes was appointed chief operating officer of Diageo in March 2012 and then made a director in July 2012.

He had earlier served in various positions in companies like Nestle, Booz-Allen & Hamilton and Whirlpool.

The 53-year-old Ivan Menezes now joins the ranks of other Indian-origin heads of fortune 500 corporations such as Indra Nooyi, Ajay Banga and Rakesh Kapoor.

While Diageo saw its value triple under Walsh, the company of late, however, has been struggling with some of its attempts to make acquisitions in emerging markets. Menezes, with his Indian background and wide knowledge of the US market, would help Diageo fulfill its global ambitions.

Diageo had, in November, agreed to buy a controlling 53.4 per cent stake of India's biggest liquor maker United Spirits in a two-stage process. Diageo has completed the first stage and the second stage of open offer is yet to be completed. If unsuccessful, Diageo will have to end up with around 30 per cent stake in the company.

Diageo also failed in its attempt to buy stake in tequila brand Jose Cuervo after long-running talks collapsed in December.

The company formed in 1997 with the merger of Grand Metropolitan with Guinness, and houses brands such as Guinness and J&B whisky that date from the eighteenth century, is now looking at emerging markets as key to success.

Diageo is the world's leading premium drinks business with an outstanding collection of beverage alcohol brands across spirits, beer and wine. These brands include Johnnie Walker, Crown Royal, J&B, Buchanan's, Windsor and Bushmills whiskies, Smirnoff, Ciroc and Ketel One vodkas, Baileys, Captain Morgan, Jose Cuervo, Tanqueray and Guinness. Thje company's products are sold in more than 180 countries around the world.