Prime Minister Narendra Modi today launched the Kushinagar International Airport, as he welcomed the first flight from Sri Lankan with a delegation which landed at the airport. The prime minister said the facility is a tribute to the devotion of Buddhists around the world. 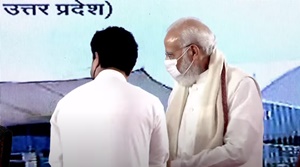 The Kushinagar airport will directly connect the region that is witness to the entire journey from the enlightenment of Lord Buddha to Mahaparinirvana to the world outside, the prime minister said.
He highlighted the special focus on the development of the places associated with Lord Buddha through better connectivity and the creation of facilities for the devotees.
The airport will serve nearby districts of Uttar Pradesh and Bihar and is an important step in boosting the investment and employment opportunities in the region. By enhancing the development of a Buddhist theme-based circuit, the airport will cut short the journey in Lumbini, Bodhgaya, Sarnath, Kushinagar, Shravasti, Rajgir, Sankisa, and Vaishali circuit. Direct air routes with South Asian countries will make it easier for tourists coming from Sri Lanka, Japan, Taiwan, South Korea, China, Thailand, Vietnam, and Singapore, etc., to reach the rich heritage site.
Paying tribute to Maharshi Valmiki on his Jayanti today, the prime minister said the country is marching on the path of `Sabka Vikas’ with the help of `Sabka Satha’ and `Sabka Prayas’.  “Development of Kushinagar is one of the key priorities of the UP and central governments,” he said.
The prime minister said that tourism in all its forms, whether for faith or for leisure, needs modern infrastructure complete with rail, road, airways, waterways, hotels, hospitals, internet connectivity, hygiene, sewage treatment and renewable energy ensuring a clean environment. “All these are interconnected and it is important to work on all these simultaneously. Twent-first century India is moving ahead with this approach only”, the prime minister said.
Modi said that under the UDAN scheme, more than 900 new routes have been approved in the last few years, out of which air service has already started on more than 350 routes. More than 50 new airports or those which were not in service earlier, have been made operational.
The prime minister highlighted the development regarding the aviation sector in Uttar Pradesh as air connectivity is constantly improving in the state. In Uttar Pradesh, 8 airports are already functional before Kushinagar airport. Work is on Jewar International Airport after Lucknow, Varanasi and Kushinagar. Apart from that, airport projects are going on in Ayodhya, Aligarh, Azamgarh, Chitrakoot, Moradabad and Shravasti.
Referring to the recent decision on Air India, the prime minister remarked that the step will help in running the country's aviation sector professionally and prioritising convenience and safety. “This step will give new energy to the aviation sector of India. One such major reform is related to the opening of defence airspace for civil use”, he added. This step will reduce the distance on various air routes. The prime minister also conveyed that the recently launched drone policy is going to bring life-changing transformation in the fields ranging from agriculture to health, to disaster management to defence.
He said the recently launched PM Gatishakti - National Master Plan will not only improve governance but also ensure that all modes of transport such as road, rail, air etc should support each other and increase each other's capacity.
Speaking on the occasion, civil aviation minister Jyotiraditya Scindia said the Kushinagar airport, spanning over 3,600 sqm, is the ninth airport of the state and is built at a cost of Rs260 crore. The aim is to increase the tourist flow into the state, he sai, adding that the government plans to set up 17 more airports in Uttar Pradesh.
"Under prime minister's vision and guidance, we have successfully set up the Kushinagar International airport. This is the ninth airport in Uttar Pradesh and the government plans to set up 17 more airports in the state in the near future. In the first 70 years of India's independence, only 74 airports were there in the country. Under PM Modi's guidance, the government has successfully inaugurated 54 airports in the last seven years of his governance in the country. With this, 128 airports have been set up in the country," Scindia said while addressing an event in Kushinagar
Scindia added that in order to boost the airways connectivity, "The government has decided to operate direct flights from Delhi airport to Kushinagar airport for four times a week. These operations will start on November 26. We will connect directly with Kolkata and Mumbai airports as well soon."
Chief Minister Yogi Adityanath said that the opening of an international airport in Kushinagar will create a plethora of job and tourism prospects in East Uttar Pradesh. Adityanath made the remarks while inspecting preparations in Kushinagar, a day before Prime Minister Narendra Modi's inauguration of the airport.
"The airport will bring immense employment and tourism opportunities and Kushinagar is eager to welcome Sri Lankan delegates and PM Modi on Wednesday. We will be able to send the message of international friendship and compassion to Lord Buddha, all over the world," he said.
PM Modi has begun his tour to Uttar Pradesh on October 20 by inaugurating the Kushinagar International Airport, followed by a programme at the Buddhist site of Mahaparinirvana stupa and temple. He will also visit the exhibition of Ajanta fresco paintings, Buddhist Sutra calligraphy, and Buddhist artefacts. Following that, he will lay the foundation for Rajkiya Medical College, followed by the foundation for 12 other development projects worth Rs180 crore.
MORE REPORTS