President Ram Nath Kovind on Sunday gave his assent to two important ordinances that prescribes deterents against fugitive economic offenders and those involving crimes against children. With the President’s assent these two ordinances have now come into effect. 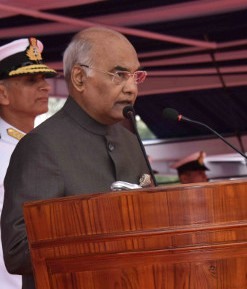 The cabinet, at its meeting on 21 April 2018, had decided to approve the proposal of the finance ministry to promulgate the ordinance.

The ordinance has been necessitated by instances of economic offenders fleeing the jurisdiction of Indian courts, anticipating the commencement, or during the pendency, of criminal proceedings.

The absence of such offenders from Indian courts has several deleterious consequences. While it hampers investigation in criminal cases, it also wastes precious time of courts of law and undermines the rule of law in India. The existing civil and criminal provisions in law are not entirely adequate to deal with the severity of the problem.

The finance minister had while presenting the budget for 2018-19, announced plans to introduce legislative changes or even a new law to confiscate the assets of such absconders till they submit to the jurisdiction of the appropriate legal forum. The Fugitive Economic Offenders Bill, 2018 was introduced in Lok Sabha on 12 March 2018. The bill was listed for consideration and passing in Lok Sabha on many occasions after its introduction. But, the House has since been adjourned sine die and both the Houses of Parliament were prorogued on 6 April 2018.

The ordinance provides for setting up a special court under the Prevention of Money-laundering Act, 2002 to declare a person as a Fugitive Economic Offender. A Fugitive Economic Offender is a person against whom an arrest warrant has been issued in respect of a scheduled offence and who has left India so as to avoid criminal prosecution, or being abroad, refuses to return to India to face criminal prosecution.

A scheduled offence refers to a list of economic offences contained in the Schedule to this Ordinance. Further, in order to ensure that courts are not over-burdened with such cases, only those cases where the total value involved in such offences is Rs100 crore or more, is within the purview of this Ordinance.

If at any point of time in the course of the proceeding prior to the declaration, however, the alleged fugitive economic offender returns to India and submits to the appropriate jurisdictional court, proceedings under the proposed Act would cease by law. All necessary constitutional safeguards in terms of providing hearing to the person through counsel, allowing him time to file a reply, serving notice of summons to him, whether in India or abroad and appeal to the high court have been provided for.

It is expected that a special forum to be created for expeditious confiscation of the proceeds of crime, in India or abroad, would coerce the fugitive to return to India to submit to the jurisdiction of courts in India to face the law in respect of scheduled offences.

Since the proposed law would utilise the existing infrastructure of the special courts constituted under the Prevention of Money Laundering Act, 2002 and the threshold of scheduled offence is high at Rs100 crore or more, no additional expenditure is expected on the enactment of the bill.

The bill is expected to re-establish the rule of law with respect to the fugitive economic offenders as they would be forced to return to India to face trial for scheduled offences. This would also help banks and other financial institutions to achieve higher recovery from financial defaults committed by such offenders, improving the financial health of such institutions.

The new law would cover all the states and districts.

The President also promulgated the ordinance which paves way for providing stringent punishment to those convicted of raping children by making changes in criminal laws pertaining to sexual assault on children below 12 and 16 years.

With the notification, the Indian Penal Code, the Indian Evidence Act, 1872, the Code of Criminal Procedure, 1973 and the Protection of Children from Sexual Offences Act, 2012 stand amended. The notification states that since Parliament is not in session and President is satisfied that circumstances exist which render it necessary for him to take immediate action.

“Whereas Parliament is not in session and the President is satisfied that the circumstances exist which render it necessary for him to take immediate action. Now, therefore, in exercise of the powers conferred by clause (1) of article 123 of the Constitution, the President is pleased to promulgate the following ordinance,” the Gazette notification read.

As per the amended law, there is now a provision of death sentence for rapists of girl under 12 years, while the minimum punishment in case of women has been increased from rigorous imprisonment of 7 years to 10 years, extended to life imprisonment.

The measure also provides for speedy investigation and trial. The time limit for investigation of all cases of rape has been prescribed, which has to be mandatorily completed within two months, the new law says.