The booster shot proposed by Prime Minister Narendra Modi is expected to come in lower GST rates for 60 goods and services, which would make these cheaper, say media reports. 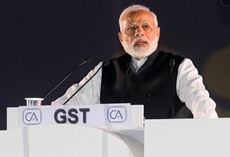 Finance minister Arun Jaitley is expected to push for big rate cuts at today's GST Council meeting, as part of a broader strategy to help the economy claw out of the biggest growth slump in three years.

The decision was made after Prime Minister Narendra Modi brainstormed for over three hours with Jaitley and BJP president Amit Shah on Thursday, taking stock of the current state of the Indian economy that is yet to adjust to the goods and services tax (GST) rolled out in July and the lingering effects of demonetisation.

Reports quoting finance ministry officials said the government has identified many items in the 28 per cent and 18 per cent GST brackets that would be brought down to 18 per cent and 12 per cent, respectively.

''A decision towards this is yet to be taken as it would require Council's approval,'' the official said.

The rate cuts, if announced today, will help boost household spending just in time for the pre-Diwali buying season.

GST has four broad slab structures – 5, 12, 18 and 28 per cent – along with a cess on luxury and demerit goods such as tobacco, pan masala and aerated drinks.

It seems the sudden shift to the new tax regime has affected the pace of manufacturing and investment across various industry segments as well as retarded growth in exports.

''The implementation of the GST so far also appears to have had an adverse impact, rendering prospects for the manufacturing sector uncertain in the short term,'' RBI governor Urjit Patel said on Wednesday.

This may further delay the revival of investment activity, which is already hampered by stressed balance sheets of banks and corporates.

The RBI has placed the onus firmly on the government to engineer a quick turnaround in the economy that was still smarting under an imperfect GST roll out, marred by complaints about technical glitches on the tech backbone and procedural hassles.

Meanwhile a delay in GST refunds has resulted in severe fund shortage for exporters, which has affected working capital availability and normal operations.

Exporters say nearly Rs65,000 crore would remain locked up in GST input tax credits if rules are not eased by December. A panel headed by revenue secretary Hasmukh Adhia is expected to suggest solutions to this the GST Council.

GST, billed as India's most ambitious reform move, has consolidated a patchwork of 17 local and central duties into a single levy, stitching together a common national market, and enabling way for a more robust economy.

Among various challenges, small and medium businesses have been particularly hit due to higher compliance burden owing to complex monthly return filing and glitches in the information technology (IT) portal GST Network (GSTN).