Ordinance soon to ban possession of old notes beyond 30 December

Holding of old demonetised Rs500 and Rs1,000 currency notes after the 30 December deadline for depositing these in banks will attract a penalty of minimum Rs50,000 and the government is likely to come out with a new ordinance in this regard soon. 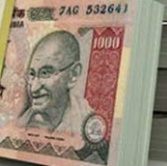 However, seizure of old currency during income tax raids will attract a penalty of up to 137 per cent, if they holders of these currency fail to explain the source of undisclosed income after, according to the income tax department.

Reports say the government is planning a new ordinance to completely ban the holding and usage of these old bank notes and is likely to come up with it before 30 December.

The government is also likely to impose tough penalty on holding of old notes, reports said.

The ordinance could cap the holding of these demonetised notes at not more than 10 notes of each after 30 December. Violation of the rule could draw a fine of a minimum of Rs50,000 or 5 times the amount in question, whichever is higher, reports say.

There is, however, no official word on the reported move to issue an ordinance banning these notes.

The government, while announcing demonetisation of these high value notes, had allowed its use in select places or exchange of these in banks till 30 December. Beyond this deadline these notes become completely illegal.

Individuals can at present withdraw up to Rs24,000 per week at banks and Rs2,500 per day at ATMs while the exchange of old notes over the counter has been completely banned.

Customers can, however, exchange old notes at the RBI over-the-counter desk till the 30 December deadline.

Black money holders, however, will have to bear taxes and penalties amounting to as high as 137 per cent if they do not admit to or fail to explain the source of undisclosed income after being raided, according to the income tax department.

However, the total levy may be limited to 107.25 per cent if the undisclosed income is admitted during search operations and that income is substantiated, the department said in a release, adding that the tax dodgers can come clean by paying 50 per cent on bank deposits post demonetisation.

If one fails to admit his unexplained income during the course of search and in case, taxes are not paid and he does not substantiate the manner in which income is earned, then the tax incidence will be 137.25 per cent, the tax department said in a release.

"We are asking people to declare their undisclosed cash deposits in banks, post offices which have not been subject to tax earlier under Pradhan Mantri Garib Kalyan Yojna, 2016 (the scheme)," Principal Chief Commissioner of Income Tax (NWR) Rajendra Kumar said on Monday.

This scheme which has come into effect on 17 December shall remain open for declarations up to 31 March 2017, he said.

If the income is not admitted during search and the assessee is not able to substantiate the earning, it will attract 60 per cent tax, 60 per cent penalty, 15 per cent surcharge, 3 per cent education cess surcharge – adding up to 137.25 per cent.

In case, the income is admitted during search and the assessee is able to substantiate the earning, it will attract 60 percent tax, 30 per cent penalty, 15 per cent surcharge, 3 per cent education cess surcharge - totalling 107.25 per cent.