Ahead of the 30 December deadline for exchange of demonetised currency notes against the new legal tender, Prime Minister Narendra Modi on Sunday hinted that the restrictions on cash transactions will continue as the government pushes the digital economy. 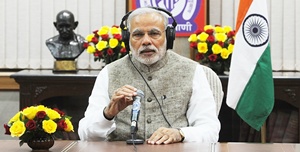 Addressing the nation on Christmas day, in his monthly radio broadcast `Mann Ki Baat', the prime minister urged people, especially in rural India, to go cashless, pointing out that ''during the past few days, cashless trading has increased by 200-300 per cent''.

Modi highlighted his government's ''battle against black money and corruption'', and said it was aimed at a just society that Jesus Christ also envisioned and that there was no question of a ''retreat'.

Instead, he said, the government will bring about a law against 'benami' property to hunt and punish those engaged in such illegitimate transactions.

''You are possibly aware of a law about benami property in our country, which came into being in 1988, but neither were its rules ever framed nor was it notified. It just lay dormant gathering dust. We have retrieved it and turned it into an incisive law In the coming days, this law will also become operational,'' he said.

The prime minister on Sunday announced two cash reward schemes for traders and consumers - Digidhan Vyapar Yojana and Lucky Grahak Yojana - and urged people, especially the rural poor, to use mobile phones for e-payments, instead of cash.

Even the poor can use USSD (unstructured supplementary service data, a technology that facilitates digital payment without the internet) on ordinary mobile phones to buy and sell goods as well as make payments and thus become eligible for the reward scheme. In rural areas, too, people can buy or sell through AEPS (Aadhaar-Enabled Payment System) and can win rewards, Modi said.

Modi said the online payment of wages, while making transactions cash-free, will also help convert the informal sector into the formal sector, ending the exploitation faced by workers. ''The cut, which had to be paid earlier, has stopped now and it has become possible for the worker, the artisan and such poor persons to get their full amount of money.''

Modi also defended the frequent changes to the cash withdrawal and deposit rules by the Reserve Bank of India. ''The government, being sensitive amends rules as required, keeping the convenience of the people as its foremost consideration, so that citizens are not subjected to hardships.'' He added that ''to counter new offensives, we too have to devise appropriate new responses and antidotes,'' he said.