The government on Thursday closed the window for over-the-counter exchange of demonetised Rs1,000 and Rs500 currency notes, but extended the exemptions for the use of the old series Rs500 notes till 15 December. 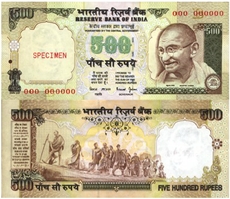 Also, the old demonitised currency notes can be used for payments for pre-paid mobile top-ups as also school/college fees, the finance ministry said.

The finance ministry said holders of the specified bank notes can deposit them in their bank accounts until 30 December 2016, even as it noted a decline in the exchange of old notes.

''It has been felt that people may be encouraged... to deposit their old Rs500 and Rs1,000 notes in their bank accounts,'' the ministry stated, adding that it would encourage people in the rural areas to open bank accounts and deposit the notes.

Under the modified set of exemptions, the ministry said payments for transactions under all the exempted categories will henceforth be accepted only through old Rs500 notes.

Following the decision to demonetise Rs500 and Rs1,000 notes on 8 November, the finance ministry had allowed use of the old currency for various purposes such as petrol pumps, government hospitals, purchase at pharmacies based on prescriptions by doctors as well as utility bills. These were to end on Thursday (24 November) midnight.

It has also extended the exemption for payments towards pre-paid mobile top-up up to Rs500.

However, the ministry has restricted the use of old notes for payment of current dues and arrears to utilities of only water and electricity. Further, the facility would be available only for individuals and households, it said. Similarly, purchase from consumer cooperative stores will be limited to Rs5,000 at a time.

''Considering that the ministry of road transport and highways have continued the toll-free arrangement at the toll plazas up to December 2, it has been decided that toll payment at these toll plazas may be made through old Rs500 notes from December 3-15,'' it further said.

As a special dispensation to foreign citizens and tourists in India, the government has also permitted them to exchange foreign currency up to Rs5,000 per week. ''Necessary entry to this effect will be made in their passports,'' said the ministry, adding that the RBI will also issue further guidelines.