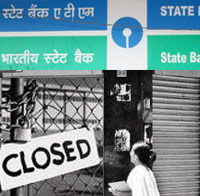 Banking services across the country were affected on the first day of a two-day strike called by the federation bank employee unions. Some of the old private sector banks and foreign banks also joined the strike called by the United Forum of Bank Unions (UFBU) against outsourcing of bank jobs and creation of redundancies in banks through financial sector reforms.

In Mumbai, almost all banks, including old private sector banks and foreign banks, remained closed on the first day of the two-day strike as employees stayed away from work.

Offices of the new private sector banks like ICICI Bank, HDFC Bank and Axis Bank remained open although cheque clearances there too were hit as all major public sector banks, which account for around 75 per cent of the country's banking transactions, remained closed.

Although ATMs were operating, customers complained of cash shortages at several ATMs as the day progressed. It is also likely that cash with other ATMs would also dry up by tomorrow as the strike enters the second day.

The two-day strike is expected to cause piling up of cheques worth a minimum of Rs14,000 crore and delay transactions by another two days.

The million-strong bank employees and officers are protesting against the government's proposals for increasing the cap on foreign ownership of state-run banks that make up around 75 per cent of the sector.