Over 2 lakh evacuated along east coast as Cyclone Fani looms

Government agencies have evacuated more than 200,000 people along the Andhra Pradesh and Odisha coast ahead of the severe cyclonic storm making a landfall on Friday. 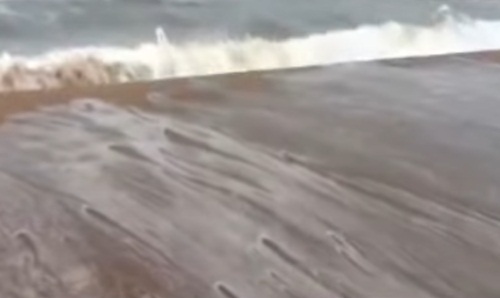 While many have been shifted out in buses, boats and trains, several others have left on their own, and several villagers were seen piling household possessions on to trucks before fleeing their homes.
Authorities expect a total of about 800,000 people to be evacuated from low-lying areas of Odisha to cyclone shelters, schools and other buildings.
In the temple town of Puri, where the severe cyclonic storm Fani was lying 420 km south-west in the Bay of Bengal, special trains were pressed into operation to evacuate tourists.
The Indian Meteorological Department (IMD) said the tropical cyclone Fani was expected to generate maximum sustained winds of 170-180 km per hour. Cyclone tracker Tropical Storm Risk rated Fani as a mid-range category 3 storm.
Operations at two major ports - Paradip and Visakhapatnam – have been suspended and ships have been ordered to move out to avoid damage.
In Paradip, television footage showed residents piling bicycles, sewing machines and gas cylinders on to small trucks and leaving for any of nearly 900 shelters supplied with food, water and medicines.
Odisha state government has deployed hundreds of disaster management personnel, closed schools and colleges and asked doctors and other health officials not to go on leave until 15 May.
Cabinet Secretary P K Sinha again today reviewed the preparedness of states and central ministries/agencies concerned to deal with the situation arising out of the extremely severe cyclonic storm.
The IMD expects Fani to touch Odisha coast south of Puri on the afternoon of 3 May with wind speeds ranging up to 180 kmph causing heavy rainfall in the coastal districts.
Tropical cyclone Fani is expected to make a land fall in Andhra Pradesh, hitting the districts of Srikakulam, Vijayanagram and Visakhapatnam.
The storm is likely to impact coastal districts of Odisha, including Ganjam, Gajapati, Khurda, Puri and Jagatsinghpur, Kendrapada, Bhadrak, Jajpur and Balasore.
In West Bengal, districts of East and West Medinipur, South and North 24 Parganas, Howrah, Hoogly, Jhargram and Kolkata, IMD said.
IMD also warned of storm surge of about 1.5 meter height which may inundate low lying coastal areas of Ganjam, Khurda, Puri and Jagatsinghpur districts of Odisha at the time of landfall.
Reviewing the preparedness of the State and Central Agencies, Cabinet Secretary directed that all necessary measures be taken to complete evacuation of people from areas in cyclone path and maintain adequate quantities of essential supplies such as food, drinking water and medicines etc.
Officers of concerned state governments apprised the NCMC of preparatory measures put in place for dealing with cyclonic Storm.
Odisha informed that around 900 cyclone shelters have been made ready to house the evacuees and requested for two helicopters to be stationed in the state for emergency food distribution. Cabinet secretary directed the ministry of defence to meet the requirements of Odisha government.
He once again advised all concerned to make adequate preparations to ensure maintenance of essential services such as Power, Telecommunications in the event of damages caused to them.
Railways, civil aviation and shipping ministries were advised to review their preparedness well in time and ensure quick resumption of their services in the event of any disruption.
Indian Coast Guard and the Navy have deployed ships and helicopters for relief and rescue operations. Army and Air Force units in the three States have also been put on standby
NDRF has deployed 12 teams in Andhra Pradesh, 28 teams in Odisha and 6 teams in West Bengal. Additionally 32 teams have been kept on standby. The teams are equipped with boats, tree cutters, telecom equipment etc.
States have issued advisories and are ensuring that fishermen do not venture into the sea.  IMD has been issuing three hourly bulletins with latest forecast to all the concerned States. MHA is also in continuous touch with the State Governments and the central agencies concerned.
MORE REPORTS