Cyclone Idai that brought death and destruction to the Southern African states of Mozambique, Zimbabwe and Malawi, killing an estimated 732 people and displacing millions, is threatening more destruction as the United Nations humanitarian office warning of fresh wave of rains and floods. 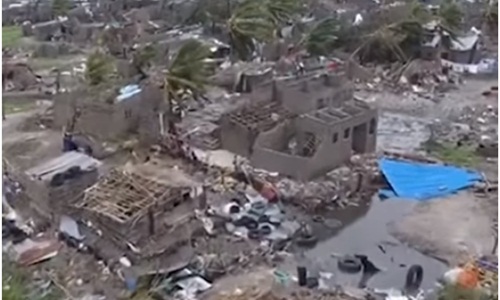 A week after the cyclone made a landfall in the port city of Beira with winds of up to 170 km per hour and then moved inland to Zimbabwe and Malawi, swamping populations and devastating homes, the UN humanitarian office warned that more flooding may come as heavy rains inland poured into the low-lying Beira area and nearby dams filled up threatening to burst the Buzi and Pungwe rivers again.
Mozambique expects the death roll to go up after reporting 732 deaths on Saturday. Several thousands are in desperate need for food and shelter.
After lashing the port city of Beira with winds of up to 170 km per hour last week, the cyclone moved inland to Zimbabwe and Malawi, swamping populations and devastating homes.
Beira, the port city home to more than 500,000 people that bore the brunt of the cyclone, has been cut off by road, causing shortages of food and water. The Mozambican government has officially asked for international assistance.
Mozambique's death toll rose to 417 from 242, Land and Environment Minister Celso Correia said.
"The situation is getting better, still critical, but it's getting better," he told reporters at the airport in Beira that has become a centre for aid operations.
The storm has also killed 259 in Zimbabwe, while in Malawi 56 people died in heavy rains ahead of the cyclone.
In all three countries, survivors have been digging through rubble to search for victims, and scrambling for shelter, food and water, while governments and aid agencies rush in help.
Those affected have lost everything – food,  clothes and their homes – and have nowhere to go with the children.
At the refuge, families cooked with wood from trees ripped up by the storm, as toddlers played around battered school desks. Manuel wore a necklace with the word "Hope."
Mozambican officials said some 1,500 people were in need of immediate rescue from rooftops and trees.
The United Nations World Food Programme raised the crisis classification for Mozambique’s flooding to its highest level, which it said put the disaster on par with Syria and Yemen.
“The designation will accelerate the massive operational scale-up now underway to assist victims,” the WFP said in an online statement. “To date, more than 20,000 people have received WFP food assistance.”
From March 14, Idai caused floodwaters to submerge hundreds of square miles of central Mozambique as rescuers used helicopters and boats to save people stranded in trees and on rooftops.
Satellite imagery shows numerous floodplains, including an “inland ocean” that is the size of Luxembourg, the WFP said. While almost 110,000 people have been saved, according to the National Institute of Disaster Management, at least 600,000 people have been displaced, the WFP said.
“The situation will get worse before it gets better,” Henrietta Fore, an executive director of the United Nations International Children’s Emergency Fund, said in an emailed statement on Saturday. “Aid agencies are barely beginning to see the scale of the damage. While the search and rescue operations continue, it is critical that we take all necessary measures to prevent the spread of water-borne diseases which can turn this disaster into a major catastrophe.”
Flooding, combined with overcrowded conditions in shelters, poor hygiene, stagnant water and infected water sources, is putting survivors at risk of diseases like cholera, malaria and diarrhea, according to UNICEF.
“In Beira city, food prices have reportedly risen by about 300 per cent, with long queues observed for staples such as bread and fuel,” the UN Office for the Coordination of Humanitarian Affairs said in a statement Friday. “The city remains without electricity, while telephone and internet communication is intermittent.
MORE REPORTS