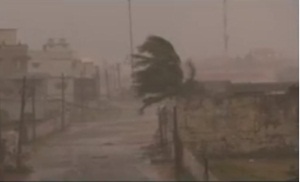 The "very severe" cyclonic storm has caused widespread damage in Srikakulam and Vizianagaram districts of north coastal Andhra Pradesh on Thursday, the State Disaster Management Authority (SDMA) said.
The cyclone threw normal life out of gear as heavy to very heavy rains started lashing the two districts since late Wednesday night. Eight people were killed in different storm-related incidents.
Cyclone Titli hit coastal Odisha bringing with it strong winds and heavy rain in the region. 'Titli' made a landfall in the beach town of Gopalpur. Trees and electric poles were uprooted in several parts of the district. Power supply and telephone links got disrupted and road communication snapped due to uprooted trees and electric poles after the cyclone.
Over three lakh people in Odisha's five coastal districts have been moved to safety.
Eight districts of Odisha - Ganjam, Khurdha, Puri, Jagatsinghpur, Gajapati Kendrapara, Bhadrak and Balasore – have been hit by the very severe cyclonic storm that caused heavy to very heavy rainfall in large parts of the state, damaging thatched and asbestos houses and street lights.
The cyclone crossed the north Andhra Pradesh-south Odisha coast near Palasa in Srikakulam district to the southwest of Gopalpur with estimated maximum sustained surface wind speed of 140-150 kmph gusting to 165 kmph between 0430 hours and 0530 hours, according to a statement issued by the home ministry.
In Andhra Pradesh, the chief minister's office (CMO) informed that six fishermen, who had put out to sea, were killed. Of the 67 fishing boats that had ventured into the sea over the last few days from Kakinada in East Godavari district, 65 had returned to the shore safely, the CMO said. Efforts were on to bring back the remaining two boats safely, SDMA added in a release.
The storm is likely to move northwestwards by the evening and then recurve northeastwards towards Gangetic West Bengal, weakening gradually into a deep depression by Friday morning, the weatherman said.
The Railways has suspended the following trains due to the cyclone Titli in Odisha:
- 22819/22820 Bhubaneswar-Visakhapatnam-Bhubaneswar Inter City Express from both the directions (on 11 September 2018);
- 22874 Visakhapatnam-Digha Express from Visakhapatnam (11 September 2018);
- 12864 Yesvantpur-Howrah Express from Yesvantpur (10 September 2018);
- 12509 Bangalore Cant-Guwahati Express from Bangalore Cant (10 September 2018);
- 15227 Yesvantpur-Muzafarpur Express from Yesvantpur (10 September 2018); and
- 18645 Howrah-Hyderabad East Coast Express from Howrah (11 September 2018).
MORE REPORTS