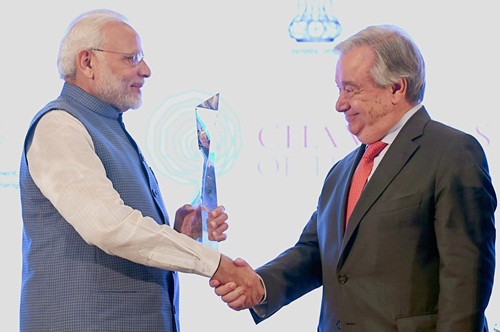 UN Secretary General Antonio Guterres presented the prime minister with the award announced on 26 September, on the sidelines of 73rd UN General Assembly at New York City, on the sidelines of the second member assembly of the International Solar Association (ISA) in New Delhi today.
Prime Minister Modi has been selected in the leadership category for his pioneering work in championing the International Solar Alliance and for his unprecedented pledge to eliminate all single-use plastic in India by 2022.
French President Emmanuel Macron has also been named as recipient of the prestigious award for exemplary leadership and advocating action on sustainable development and climate change.
"UN Environment is recognising Indian Prime Minister Narendra Modi for his bold environmental leadership on the global stage. Under Modi’s leadership, India pledged to eliminate all single-use plastics in the country by 2022. Prime Minister Modi also supports and champions the International Solar Alliance, a global partnership to scale up solar energy,” UN's citation for the award read.
The annual ‘Champions of the Earth’ prize is awarded to outstanding leaders from government, civil society and the private sector whose actions have had a positive impact on the environment.
The UNEP Champions of the Earth award is given to leaders from government, civil society and the private sector whose actions have resulted in a significant positive impact on the environment.
According to the UNEP website, "The Champions of the Earth award is the UN’s highest environmental recognition celebrating exceptional figures from the public and private sectors and from civil society, whose actions have had a transformative positive impact on the environment... Since being founded thirteen years ago, the awards have recognized 84 laureates – ranging from leaders of nations to grassroots activists – in the categories of policy, science, business and civil society."
Earlier recipients of the award include: Afroz Shah, who led the world’s largest beach cleanup (2016); Rwandan President Paul Kagame (2016); former US vice president Al Gore (2007), Ocean Cleanup CEO Boyan Slat (2014), scientist-explorer Bertrand Piccard, and developer of Google Earth Brian McClendon (2013), according to the UNEP release.
MORE REPORTS