After a lull on Thursday and today, another set of thunderstorms is likely to hit India's north-western plains on Saturday, the Union government has said. 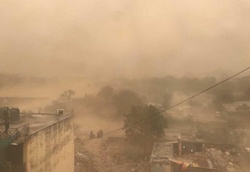 The government issued a fresh warning of thunderstorms and squalls in West Bengal, Odisha, Bihar and Uttar Pradesh in the next 24 hours.
According to the India Meteorological Department (IMD), northern Rajasthan, western Uttar Pradesh, Punjab, Haryana, Delhi and parts of Uttarakhand will also be affected. Thunderstorms along with squalls are also very likely at isolated places over Assam and Meghalaya, Nagaland, Manipur, Mizoram, Tripura as well.
Isolated places in Jammu and Kashmir, Himachal Pradesh, Uttarakhand, Haryana, Chandigarh and Delhi, Punjab, Bihar, Jharkhand, Sikkim, Odisha, northwest Madhya Pradesh, Telangana, Rayalaseema, north coastal Andhra Pradesh, interior Tamil Nadu and Kerala are very likely to experience thunderstorms along with gusty winds.
Heavy rains are very likely at isolated places over Tamil Nadu and Kerala, while dust storm and thunderstorm are very likely at isolated places over Rajasthan.
The Union home ministry has also issued an advisory for Saturday, saying thunderstorm accompanied with squall are very likely at isolated places in Uttarakhand, Assam and Meghalaya, Nagaland, Manipur, Mizoram, Tripura, Sub-Himalayan West Bengal and Sikkim.
A home ministry spokesperson said 124 people were killed and over 300 injured in thunderstorm and lightning that struck five states in the past two days. The largest number of 73 deaths was reported from Uttar Pradesh, where 91 were also injured. Most of these deaths and injuries took place in the Agra region.
In Rajasthan, 35 people were killed and 206 injured. Eight persons were killed in Telangana, six in Uttarakhand and two in Punjab. Nearly 100 people were injured in the three states.
Following the thunderstorm, power supply was cut in many areas as 12,000 electric poles were uprooted and 2,500 transformers damaged.
The IMD said a fresh western disturbance — a system of extra-tropical storms — is expected to bring rain to several parts of north India in the next 24 hours. Dust storms are also expected in Rajasthan and several parts of the northeastern India in the next 48 hours.
“This is not an unusual system (strong thunderstorms in the pre-monsoon period); but every few years, the intensity of thunderstorms increases. In the northeastern and eastern India, such storms are more frequent,” said M Mohapatra, a senior scientist at the IMD’s forecast division.
Currently, the forecast systems can warn of severe storms three days in advance, so more squalls and storms in north India could not be ruled out, he said.
"We are expecting a western disturbance to approach the hill region on 5 May. This will have an effect on north-western plains,” Mahapatra said. "The intensity of the thunderstorm could only be predicted two hours prior to the activity," he added.
According to the weather analysts, a trough over north Rajasthan and Madhya Pradesh will lead to further thunderstorm activity around Tuesday, 8 May, but it will not be severe.
"May 5 (today) may bring light rains in the region," according to independent agency Skymet.
MORE REPORTS