Oceans running out of oxygen; could cause global suffering

A sweeping review published Thursday in Science documented the causes, consequences and solutions to what is technically called ''deoxygenation''. They discovered a four-to-tenfold increase in areas of the ocean with little to no oxygen, which researchers say is alarming because half of earth's oxygen originates in the ocean. 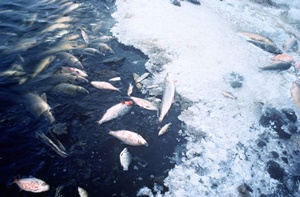 "This is a global problem, and global warming is making it worse," Denise Breitburg, senior scientist at the Smithsonian Research Center and lead author of the study, told National Geographic. "It requires global solutions."

Oxygen is crucial for marine life in the oceans. Without oxygen in the oceans, marine life will die off or relocate. ''Animal life in the ocean needs oxygen to breathe,'' Lisa Levin, study co-author and biological oceanographer at Scripps Institution of Oceanography at the University of California San Diego, told Newsweek. ''If we want a healthy ocean, we need an ocean with oxygen in it.''

The team of scientists is from the United Nations Intergovernmental Oceanographic Commission's working group, created in 2016 and called the Global Ocean Oxygen Network. They noted that the amount of water in the open ocean without oxygen has quadrupled in 50 years. It is more than twice as bad for coastal waters, such as estuaries and seas In those sites, low-oxygen areas have increased tenfold since 1950. This paper is the first to look at both ocean and coastal waters, which are often studied separately.

"Loss of oxygen in many ways is the destruction of an ecosystem," Breitburg says. "If we were creating vast areas on land that were uninhabitable by most animals, we'd notice. But we don't always see things like this when they are happening in the water."

Deoxygenation directly results in devastation for people's livelihoods. Fish kills in a single town in the Philippines cost over $10 million, according to the researchers. Coral reefs are valued at $172 billion per year, according to the Smithsonian's National Museum of Natural History. Already stressed and bleaching corals, caused by increased sea surface temperatures, can be harmed by a lack of oxygen too.

''There are a whole bunch of livelihoods that depend on a healthy ocean that doesn't smell and have a lot of dead stuff in it,'' Levin said. ''When the oxygen gets very low in the ocean, animals leave if they can.'' Those species will relocate, get eaten or starve to death.

The change is connected with warmer ocean temperatures. ''Warmer water holds less oxygen,'' Levin explained. Also, increased surface temperatures make it more difficult for oxygen to reach relatively deeper parts of the ocean. The majority of oxygen loss is occurring at 300 to 2,200 feet deep. For reference, some parts of the ocean are 7 miles deep. Oxygen is typically replenished when surface water mixes with the deeper water, but when the oceans are hotter, there is less vertical mixing.

A second source of deoxygenation also plagues the coastal waters. Although this problem has nothing to do with warmer waters caused by human-induced climate change, humans aren't off the hook. Excess nutrients from agriculture and sewage cause excess algae growth. The decay process of algae uses up the oxygen in a process called eutrophication, Levin said.

Notorious "dead zones" where oxygen sinks so low animals suffocate and die are in the Chesapeake Bay and the Gulf of Mexico, according to the researchers. Better sewage treatment, farming practices, and laws like the Clean Air Act have aided the recovery in the Chesapeake, according to the authors. That recovery, they note, is an example that people can improve the declining oxygen levels.

Zones with little to no oxygen shrink habitats for marine life, but the researchers said that even small oxygen declines can cause problems. Lack of sufficient oxygen can stunt growth in animals, harm reproduction and lead to disease or death. It can also cause a greenhouse gas called nitrous oxide to be released into the air. Nitrous oxide is up to 300 times more powerful than carbon dioxide, according to the researchers.

''The decline in ocean oxygen ranks among the most serious effects of human activities on the Earth's environment,'' said Breitburg.

But, Breitburg added, people can solve the problem. ''Halting climate change requires a global effort but even local actions can help with nutrient-driven oxygen decline.''

The authors offered a three-pronged approach to solve the problem: tackling nutrient pollution and climate change; protecting marine life from further stress; and improve low-oxygen tracking on a global scale.