The hole in the ozone layer is gradually decreasing due to less of ozone-destroying chlorofluorocarbons (CFCs) being released into the atmosphere, according to research by NASA's Goddard Space Flight Center. 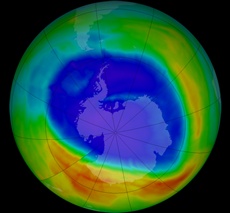 According to a report by US National Aeronautics and Space Administration, measurements taken during the research showed that there was a marked decrease in chlorine in the ozone layer, a result of an international ban on the chlorine-containing manmade CFCs over the years.

This led to a 20 per cent decrease in ozone depletion during the winter in 2016 compared to 2005 statistics by NASA's satellite Aura.

Atmospheric scientist and one of the researchers Susan Strahan, said, ''We see very clearly that chlorine from CFCs is going down in the ozone hole, and that less ozone depletion is occurring because of it.''

The report stated when the process of ozone depletion takes place, chlorine is found in various molecular forms, most of which is not measured. However, after chlorine destroys the available ozone particles, it reacts with methane and forms hydrochloric acid, a gas which was measured by the Microwave Limb Sounder (MLS) installed in the Aura satellite.

Strahan said, ''By around mid-October, all the chlorine compounds are conveniently converted into one gas, so by measuring hydrochloric acid we have a good measurement of the total chlorine.''

By comparing the measurement of hydrochloric acid made by MLS and nitrous oxide each year, it was determined that the overall level of chlorine was decreasing at a rate of 0.8 per cent per year. The report stated that a 20 per cent decline in ozone depletion during the winter months from 2005 to 2016 was expected.

Strahan stated, ''This is very close to what our model predicts we should see for this amount of chlorine decline.

''This gives us confidence that the decrease in ozone depletion through mid-September shown by MLS data is due to declining levels of chlorine coming from CFCs. But we're not yet seeing a clear decrease in the size of the ozone hole because that's controlled mainly by temperature after mid-September, which varies a lot from year to year,'' she added.

During the 1970s and 1980s, evidence had shown that the ozone layer was getting damaged due to CFCs which resulted in an ozone-free ''hole'' over the Antarctic. Nations and conglomerates were forced to take action.

The companies started to search for CFC alternatives. The nations made an agreement, which tried to limit the use of substances which would result in the depletion of the ozone layer. This agreement was known as The Montreal Protocol.

The report said that if was difficult to determine whether the protocol was having the desired effect. This was because as ozone was generated in the stratosphere in the earth's atmosphere, the level of its eradication changes from time to time. Also, the recovery levels of the ozone layer was said to be so slow that some people were found to have claimed that the whole issue was a conspiracy or a scam.

However, the result of the research showed that The Montreal Protocol was indeed having an effect, stated the report.

The study was published 4 January in the journal Geophysical Research Letters.