Mumbai: A study by India's Department of Scientific and Industrial Research (DSIR) says that the amount of discarded electronics imported to India is growing 10 per cent each year. It also warned that 95 per cent of this electronic waste was headed toward urban slums for disassembly. 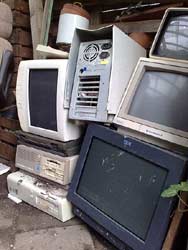 According to the report, the total amount of India's e-waste imports is projected to reach 434,000 metric tons this year.

The report warned that the country's recycling industry, located in slums, will employ at least 25,000 people in its hazardous business of dismantling used electronics in an environmentally unsafe and toxic manner.

The business, the report points out, operates without any oversight or regulation and involves handling toxic substances like lead, mercury and cadmium.

Maharashtra, one of the most industrialized states in the country, drafted new regulations to cover the disposal and recycling of e-waste within the state.

The release of the report coincided with a campaign by mobile phone giant Nokia to collect and recycle old phones and chargers. The project, according to reports, collected 3 tons of e-waste in 45 days in a pilot project in four Indian cities.

Experts point out that though promising, the amount is barely a drop in the bucket. The DSIR study stated that Mumbai alone generates about 25,000 tons of e-waste in a given year.