The United Progressive Alliance won a major victory in the Lok Sabha as the house rejected the Bharatiya Janata Party's motion against allowing foreign direct investment in multi-brand retail, with 253 nays against 218 for the motion out of 471 members present and voting. 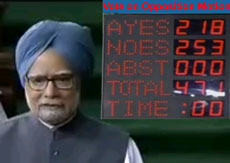 The Manmohan Singh government was greatly helped by the fact that both Mulayam Singh Yadav's Samajwadi Party and Mayawati's Bahujan Samaj Party abstained from voting, choosing to stage a walk-out from the house instead. This greatly reduced the numbers needed by the government to win the vote. Bitter opponents in Uttar Pradesh, the two parties made common cause to prop up the government.

The UPA government also won the subsequent vote on amending the Foreign Exchange Maintenance Act (FEMA), necessary to implement the FDI decision. The government won this motion moved by the Trinamool Congress by 254 to 224, out of 478 members present and voting.

Earlier, a spirited debate was held for two days on FDI in multi-brand retail in Lok Sabha, with both sides making some telling points.

After the vote, the BJP rejected the suggestion that it had made a mistake by pressing for a vote on the issue when it knew it was likely to lose.

Instead the party turned its guns squarely on the SP and BSP, saying the government would have lost the vote if they had participated. Both parties have made it amply clear that in principle that they are opposed to FDI in retail, but chose not to vote with the BJP on the issue.