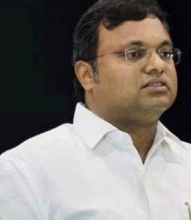 The CBI had arrested Karti on 28 February on his return from the United Kingdom,  in connection with an FIR lodged on May 15 last year
His 12-day judicial custody was to expire tomorrow in the case.
Allowing his bail petition, Justice S P Garg asked him to furnish a surety of Rs10 lakh and directed him to first seek CBI permission in advance if he wanted to go abroad.
Karti's passport is already in the custody of the authorities, his lawyers had earlier told the court.
The court also said  Karti should not not tamper with any evidence pertaining to the case while out on bail.
The CBI had opposed his bail plea on the grounds that he has "already destroyed evidence" in the case and was an "influential" person.
Karti's counsel had argued that no case under the Prevention of Corruption Act was made out against him since the Central Bureau of Investigation (CBI) had neither questioned any public servant, nor made them an accused in the matter.
Karti's lawyers denied allegations of evidence tampering and added that when the CBI itself had not sought his further custodial interrogation, there was no need to keep him in judicial custody any further.
The case being probed by the CBI pertains to alleged irregularities in Foreign Investment Promotion Board clearance to INX Media for allegedly receiving foreign funds of around Rs305 crore during his father's tenure as union finance minister in 2007.
Karti’s arrest last month was triggered by fresh evidence provided by the incarcerated former INX Media director, Indrani Mukherjea. She is currently lodged in a Mumbai prison in connection with the case of murder of her daughter Sheena Bora.
The CBI had initially alleged that Karti received Rs10 lakh as a bribe for facilitating the FIPB clearance to INX Media, and later revised the figure to $1 million.
In the separate money laundering case arising out of the corruption matter, the Delhi HC had on 9 March directed the Enforcement Directorate not to arrest or take any coercive action against Karti.
The protection was later extended by the court till 22 March. The Supreme Court subsequently transferred the ED case to itself.
MORE REPORTS