A three-year Action Agenda unveiled by NITI Aayog proposes a shift in the composition of central government expenditures by allocating a larger proportion of the incremental revenues to high-priority sectors over time. 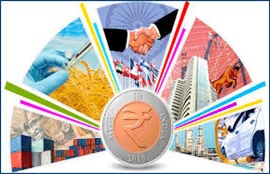 The proposals imply substantial expansion in expenditures by 2019-20 on education, health, agriculture, rural development, defence, railways, roads and other categories of capital expenditure.

The agency expects the realigning of WPI with the CPI to open up the path for an upward momentum in growth.'' Importantly, it is expected that the real growth will also continue on the path of moderate acceleration.''

NITI Aayog bases its projections on a continued increase in public investment and private consumption and a gradual recovery in private investment and exports, especially since India remains an attractive destination for foreign investments.

The agenda also includes empowering rural population through improved road and digital connectivity, access to clean energy, financial inclusion and ''Housing for All.''

It proposes boosting agricultural productivity through efficient use of inputs, introduction of new technologies and shifting from low to high value commodities. ''We need to expand the scope of irrigation to increase crop intensity, improve access to irrigation, enhance the seed replacement rate and encourage the balanced use of fertilizers.''

''Precision farming and related new technologies, that allow highly efficient farming and conserve resources, must be spread through appropriate policy interventions. Conditions conducive to shift into high value commodities such as horticulture, dairying, poultry, piggery, small ruminant husbandry, fisheries and forestry need to be created,'' according to NITI Aayog.

Finally, the Agenda envisages creation of an efficient marketing system by empowering farmers through genuine rights for direct sales to buyers of all commodities, while allowing potential buyers to buy produce directly from farmers.

NITI Aayog has suggested that entry of private agricultural markets should be free and an effective legal framework for contract farming should be established.

''Minimum Support Prices (MSPs) have distorted cropping patterns due to their use in certain commodities in selected regions. There has been an excessive focus on the procurement of wheat, rice and sugarcane at the expense of other crops such as pulses, oilseed and coarse grains. These distortions have led to the depletion of water resources, soil degradation and deterioration in water quality in the North-west. At the same time, eastern states, where procurement at the MSP is minimal or non-existent, have suffered.

''One measure that can help reduce distortions in the MSP system is the system of ''Price Deficiency Payment.'' While MSP may still be used for need-based procurement, under the deficiency payments system, a subsidy may be provided to farmers on other targeted produce, contingent on prices falling below an MSP-linked threshold,'' NITI Aayog pointed out.

Productivity and jobs
The agency also pointed to the levels of underemployment in the country. While the country's ''jobless,'' rate as per Employment Unemployment Surveys (EUS) of the National Sample Survey Office (NSSO) have consistently reported low and stable rates of unemployment of 5 to 8 per cent over more than three decades, productivity has suffered mainly because of subsistence farming, it said.

According to NITI Aayog, what India needs is the creation of high-productivity, high-wage jobs, with a focus on the measures necessary for the increased emergence of larger, organised-sector firms. It has cited examples of countries that managed to transform rapidly, such as South Korea, Taiwan, Singapore and China, where growth was led by the manufacturing sector and the ability to compete in the vast global marketplace.

This, it said requires creation of well-paid jobs for low and semi-skilled workers and an expanded ''Make in India'' campaign that looks to manufacturing for global markets.

In this respect NITI Aayog pointed to the electronics sector where focus on the domestic market through an import-substitution strategy gave rise to a group of relatively small firms behind a high wall of protection. ''They will not only fail to exploit scale economies but also miss out on productivity gains that come from competing against the best in the world,'' it added.

The Action Agenda offers detailed proposals for the implementation of an export-based strategy. Among other things, it recommends the creation of a handful of Coastal Employment Zones, which may attract multinational firms in labour-intensive sectors from countries like China.

The presence of these firms will give rise to an ecosystem in which local small and medium firms will also be induced to become highly productive thereby multiplying the number of well-paid jobs.

Also, according to NITI Aayog, unlike the past rapid transformers such as South Korea, Taiwan, Singapore and China, India has the advantage of a competitive service sector that could complement manufacturing,

Therefore, India has the advantage of walking on two legs: manufactures and services.

The Action Agenda offers specific proposals for jumpstarting some of the key manufacturing and services sectors, including apparel, electronics, gems and jewellery, financial services, tourism and cultural industries and real estate.

India's 1.25 billion citizens, a majority of which consists of the youth, increasingly aspire for greater empowerment and a better quality of life. It is in recognition of these joint aspirations that the Prime Minister has called for the transformation of India with the ''Participation of All and Development of All'' or ''Sabka Saath, Sabka Vikas.''

Sustaining growth
At the same time, NITI Aayog projected the country's fiscal deficit, which has come down from 4.5 per cent of gross domestic product (GDP) in 2013-14 to 3.5 per cent in 2016-17, to be reduced to its eventual target of 3 per cent of GDP under the Fiscal Responsibility and Budget Management (FRBM) framework by 2018-19, while it projected the revenue deficit to fall from 2.1 per cent at present to 0.9 per cent of the GDP by 2019-20.

The Action Agenda also emphasises on environmental sustainability and the need to address the high levels of air pollution in the cities, black carbon pollution indoors from the use of biomass fuels in cooking, massive volumes of solid waste in urban areas and deforestation.

For this, it suggests strengthening and streamlining regulatory structures governing sustainability of the environment while also removing hurdles that adversely impact growth without protecting the environment.

Finally, water demand for irrigation, drinking and industrial use has been increasing with growth in incomes and population. But the sources of water supply remain scarce. We must address issues such as water scarcity, uneven distribution of water resources across people, sectors and regions, deteriorating water quality and excessive dependence on groundwater, it adds.