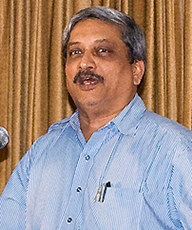 The Congress on Monday slammed comments made by defence minister Manohar Parrikar at a poll campaign meeting in south Goa that before the NDA came to power under Narendra Modi, up to 25 per cent of the defence ministry's budget of Rs3 lakh crore was being pocketed.

In a statement from Delhi, Congress spokesperson Durgadas Kamat said, ''If there were thefts during the Congress rule, who (has) stopped the defence minister from investigating? This is stooping low to get publicity.''

Parrikar, who attended a zilla panchayat election campaign meeting in Khola village in Goa on Sunday, said that he would deliver 25 per cent more output with the budgetary outlay at his disposal because of corruption in prior regimes.

''Defence budget is Rs.2.46 lakh crore and if everything is taken into account, it goes up to Rs3 lakh crore. Then there are thefts that take place,'' Parrikar said.

''Someone from the opposition in the Rajya Sabha asked me how we could do so many things with this budgeted amount. I told him, 'we can achieve 25 per cent to 30 per cent more than what you did with the same amount during your period. This is because during your regime, someone in the middle was eating up to 25 per cent and even more than that amount','' he further said.

Parrikar did not, however, name a ruling dispensation responsible for corruption in the defence ministry.

Parrikar, a former Goa chief minister was elevated to the union cabinet as defence minister in the National Democratic Alliance government in November last year.