General Anil Chauhan takes over as Chief of Defence Staff

General Anil Chauhan, PVSM, UYSM, AVSM, SM, VSM, former Eastern Army Commander, has assumed office as the Chief of Defence Staff (CDS) and Chairman, Chiefs of Staff Committee (COSC), on 30 September. General Chauhan will be the Principal Military Advisor to the defence minister on all Tri-Service matters. He will also head the Department of Military Affairs as secretary. 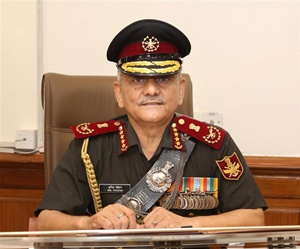 “The Government has decided to appoint Lt. Gen. Anil Chauhan (Retired) as the next Chief of Defence Staff (CDS) who shall also function as Secretary to Government of India, Department of Military Affairs with effect from the date of his assumption of charge and until further orders,” the Defence Ministry said in a statement on Wednesday.
The appointment comes more than nine months after the post fell vacant following the death of General Bipin Rawat. The country’s first CDS Gen Bipin Rawat died in a helicopter crash in December 2021.
In a career spanning nearly 40 years, Lt Gen Anil Chauhan had held several command, staff and weapons related positions and had extensive experience in counter-insurgency operations in Jammu and Kashmir and North-East India, the statement said.
Post retirement, Lt Gen Chauhan took over as the Military Advisor in the National Security Council Secretariat (NSCS) from Lt Gen. Vinod G Khandare who stepped down from the post in October 2021.
In December 2019, the government approved the creation of the post of CDS who would also function as the Principal Military Adviser to defence minister and Permanent Chairman Chiefs of Staff Committee (COSC). In addition, the DMA was created as the fifth department in the Ministry of Defence (MoD) with the CDS functioning as its Secretary.
In a brief interaction with the media before taking charge, General Chauhan said that it was a matter of pride for him to be nominated as CDS. There are hopes and expectations among the three Services, government and citizens from the new CDS which, he said, he would fulfil to the best of his abilities. He added that the security challenges facing the nation will be dealt with jointly by the three Services.
Earlier, General Chauhan paid homage to the fallen heroes by laying a wreath at the National War Memorial. He also inspected the Tri-Service Guard of Honour at the South Block Lawns, in the presence of Chief of the Air Staff Air Chief Marshal VR Chaudhari, Chief of the Army Staff General Manoj Pande, Vice Chief of the Naval Staff Vice Admiral SN Ghormade and other senior officers of the armed forces.
MORE REPORTS