Lieutenant General Dalbir Singh is poised to become the chief of the Indian Army, after the defence ministry on Monday proposed him to the Appointments Committee of Cabinet (ACC) for approval. 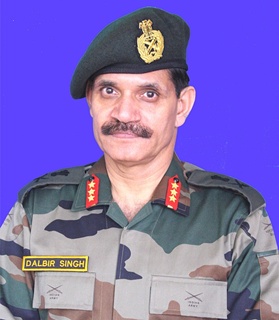 General Bikram Singh, the current Chief of Army Staff (COAS), is due to retire on 31 July; and Lt Gen Dalbir Singh will take over charge on 1 August. He will, incidentally, be the third Sikh to hold the post after Gen Bikram Singh and his predecessor, the controversial general V K Singh, who has now entered politics with the Bharatiya Janata Party.

Gen Dalbir Singh, 59, is a third-generation soldier – both his father and grandfather were Army officers.

Lt Gen Singh's name was sent to the ACC, headed by the Prime Minister, hours after the Election Commission allowed the government to go ahead with the appointment. The issue had been politicised in recent weeks, but the Bharatiya Janata Party – which had earlier opposed the appointment amid an impending change of the political guard – softened its stand.

The EC had given the government permission to proceed with making top armed forces appointments on 27 March. But the ministry sought the poll panel's opinion on the matter again two weeks ago to make its case watertight.

Though the BJP had earlier moved the EC to prevent the government from announcing the army chief, the party later climbed down from its position with a top leader saying that the party had no problems with appointments where there was little scope for the political executive to use its discretion.

Dalbir Singh, originally from Bishan village in Haryana's Jhajjar district, will serve as the army chief for two years and five months.

Lt Gen Singh has the profile of a traditional Army officer; he is said to go for a 10-km run every day and his hobbies include horse-riding and golf.

The Indian Peace Keeping Force operation in Sri Lanka was one of the defining moments of his 40-year career in the Army. His unit was one of the first to be inducted into the IPKF in 1987, suffering more than 20 casualties, including the commanding officer and a company commander.

Though posted at the Indian Military Academy in Dehradun as an instructor at the time, Dalbir Singh volunteered to join his unit in Sri Lanka and was in Jaffna within 24 hours of the tragedy hitting his unit.