Wing Commander Abhinandan Varthaman, who was captured by Pakistani forces after he parachuted down from his MiG-21 Bison fighter jet that was hit by Pakistan Air Force jets near the LoC and landed in Pakistan-occupied Kashmir, is back in India after three days in captivity. 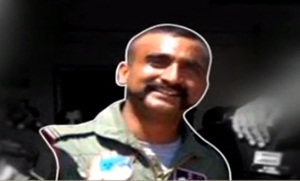 Crowds gathered at the Attari check post greeted the pilot as he touched India soil by about 6 pm.
A large number of people have assembled at the Attari Joint Check Post (JCP) to receive the Indian Air Force (IAF) pilot following news that he will be released by the evening on Friday.
People started arriving in Attari, around 30 km from Amritsar, since 6 am. Their numbers swelled by afternoon and security forces had to cordon off the area to ensure safe passage for the Wing Commander returning from captivity in Pakistan.
"We have come here to welcome our country's hero back home. We will give him a grand welcome. He showed a lot of bravery in the air combat and even after being captured by the Pakistanis," Jitender, a resident of Amritsar, who arrived in Attari with his friends, said.
Wing Commander Abhinandan's parents, Air Marshal S. Varthaman (Retired) and mother Shobha Varthaman, who is a doctor, were also present to greet him. The parents were greeted with cheers and claps by passengers when they boarded a flight from Chennai to New Delhi on Thursday evening.
Briefing a parliamentary panel, foreign secretary said the IAF pilot’s return is a diplomatic victory for India.
Wing Commander Abhinandan Varthaman was at a height of 15,000 feet in his MiG-21 jet when he spotted a Pakistan Air Force F-16 at 8,000 feet, near Nowshera, close to the Line of Control (LoC), on Wednesday morning.
“I am going after him,” the Wing Commander said over the secure radio to his mates flying in the patrol. With this started an 86-second intense chase in the sky — called dogfight or close combat in military parlance — at a speed of 1 km in 4 seconds, roughly 900 km per hour.
The two pilots were literally eye to eye and trying to get a “lock” for the missile to home in. The dogfight rose to an elevation of 26,000 feet and then swooped down a few thousand feet and then rose again.
Meanwhile, an air-to-air missile called “R-73” fired from the MiG-21 hit an F-16 jet that was downed.
“Both pilots were trying to get a ‘lock’- 60° angle, in air force parlance.” This angle provides the widest spectrum to be hit by a missile, explained a pilot. The IAF plane was hit by a missile fired by another pilot. He was by then a couple of kms on the other side of the LoC.
The entire thing was being tracked through an airborne radar. The Wing Commander’s mates flying the Sukhoi- 30 MKI and Mirage 2000 in patrol were busy chasing away other intruding PAF jets. The Wing Commander ejected at a fairly high altitude. He did so after judging that the plane could not be recovered. The parachutes fighter pilots adorn are not manoeuvrable and the wind draft took him at least 7 km on to the Pakistan side. “All this took around 86 seconds,” said a top source.
The IAF said Pakistan’s gesture of releasing Wing Commander Abhinandan was in consonance with the Geneva Convention. It’s up to the political leadership to decide on releasing evidence of Balakot strike success, it added.
Pakistan, meanwhile, rejected reports about the shooting dwn of an F-16 jet and said no F-16 fighter jet was used.
Air Vice Marshal RGK Kapoor of the IAF said Pakistan might have used F-16 provided either by Turkey, a key NATO ally, or the ones among the last tranche from the US
Senior officials said Pakistan was trying to hide the use of F-16 as the US bars the use of that plane in any offensive operation. “We have told the US,” sources said.
Pakistan had turned down a request by India to send back the Wing Commander by aerial route and not through the Attari-Wagah land border. Officials said hours after Pakistan Prime Minister Imran Khan announced the decision to release Varthaman, India conveyed to Islamabad that he be sent back via the aerial route. However, late in the night, Pakistan conveyed to India that the pilot will be returned through the Attari-Wagah border and India's request could not be heeded to, the sources said.
Air Vice Marshal RGK Kapoor is likely to address a press briefing soon at the Attari border. Arrangements are being made for the media briefing.
Punjab chief minister Captain Amarinder Singh earlier said that he chose not to receive Wing Commander Abhinandan Varthaman at the Wagah border to ensure that the defence protocol that is usually followed in such cases is not violated in any way.
IAF Wing Commander Abhinandan Varthaman has reached the Attari border. He was accompanied by Indian high commission officials from Lahore to Wagah-Attari border. He is on the Indian soil and will be taken to Amritsar soon.
The daily Retreat ceremony held at the Attari-Wagah border front along the India-Pakistan border in Punjab was cancelled for Friday in view of IAF Wing Commander Abhinandan Varthaman's release by Pakistan at this frontier, the BSF said.
Pakistani media reports that IAF Wing Commander Abhinandan Varthaman underwent a medical test at the Wagah border.
The IAF Wing Commander has been taken to Amritsar airport, from where he was flown to Delhi.
MORE REPORTS